UK MoD to Present at Military Robotics and Autonomous Systems 2019 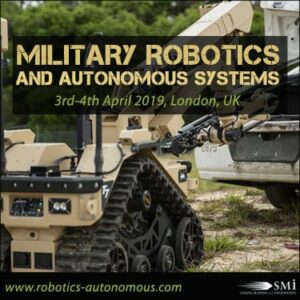 As reported last week, UK military robotic projects are to be fast tracked. Senior experts from the UK MoD will be presenting at SMi’s Military Robotics and Autonomous Systems conference, taking place in London on 3rd and 4th April 2019. Register to attend to learn about the latest developments.

It has been announced that UK Defence Secretary, Gavin Williamson, has committed £66m of the defence’s new multi-million-pound Transformation Fund to fast-track military robotic projects onto the battlefield this year. From this the British Army will benefit from:

Each of these new technologies will enhance the Army’s capabilities whilst reducing the risk of personnel. The MoD has always embraced pioneering technology and this fund will ensure the UK stays at the forefront of global military capabilities and ahead of near peer adversaries. The Defence Secretary will also look to make a further £340m available as part of the Spending Review [Source: gov.uk]

Senior experts from the UK MoD will be presenting exclusively at the upcoming two-day event:

View the agenda online for the full programme: www.robotics-autonomous.com