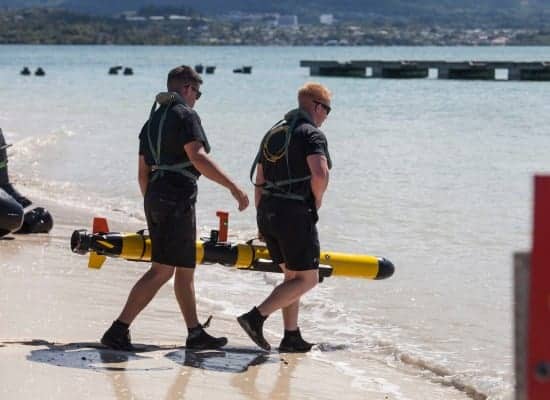 L3 OceanServer, a developer of autonomous underwater vehicles (AUVs), has announced that it has been awarded a contract to support the U.S. Marine Corps Systems Command for an Iver3 Unmanned Underwater Vehicle (UUV) to be used for testing and evaluation. Over the past four years, L3 OceanServer has leveraged hundreds of thousands of operational hours on Iver vehicles to build a system with warfighter-driven attributes. With more than 300 vehicles sold to various customers worldwide, the Iver is a commercial-off-the-shelf product that delivers the latest advances in technology with proven performance in real-world situations.

The Iver is a purpose-built UUV that carries a high-performance man-portable sensor package, including the iXBlue PHINS Compact Inertial Navigation System (INS) and the EdgeTech 2205B Bathymetry and Side Scan Sonar. The longer runtimes of the Iver, paired with its precise navigational accuracy, enable long ingress/egress missions to allow the operator greater standoff distances, increasing overall mission safety.

“L3 OceanServer has been focused on supporting the Marine Corps’ total mission profile,” said Daryl Slocum, General Manager, L3 OceanServer. “We have incorporated their direct feedback into two of our vehicle platforms, the Iver3 and Iver4, to build a premier product that supports nearshore and very shallow hydrographic surveys.”

The Iver is an open platform and often the vehicle of choice for development programs interested in designing and testing new behaviors to be used across the fleet. Many of the recent Mine Countermeasure (MCM) behaviors and Automatic Target Recognition (ATR) algorithms were originally designed and validated on the Iver platform. Today, there are more than 50 Iver systems in use by the U.S. Navy.