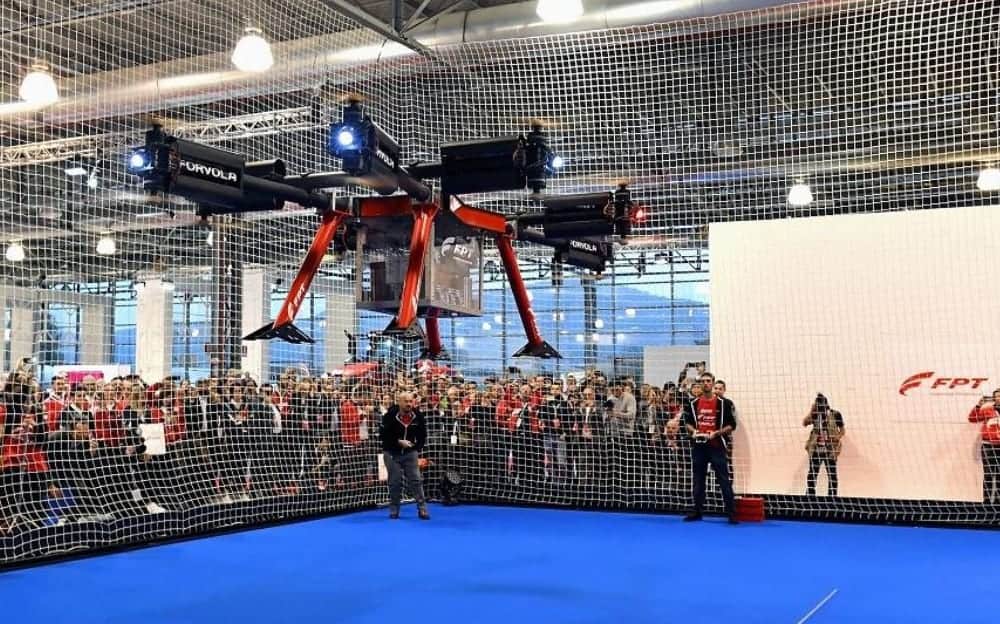 FPT Industrial and Forvola have announced that the two firms have broken the Guinness World Record for the heaviest payload lifted by a drone during FPT Industrial’s Tech Day event in Turin, Italy. Forvola’s “megadrone”, with its 16 propellers, lifted a box full of FPT Industrial spare parts weighing 101 kg to a height of almost 1.5 meters for more than one minute and three seconds.

The record was officially certified by Guinness World Records on December 6th, 2018. The previous record belonged to the University of Oslo, Norway, whose drone lifted 61 kg to a height of one meter for 37 seconds in 2015.

FPT Industrial’s Tech Day 2018 was dedicated to 4.0 Powertrain Technologies, during which visions of technologies that are changing the industry were discussed. It was an ideal occasion for the record attempt, given the potential Forvola megadrones have for spare parts delivery in remote places, to transport devices capable of giving engine assistance when needed, and as a tool to leverage precision farming activities.

Forvola’s customizable unmanned aerial vehicle (UAV) has a power of 10 to 20 kW, can carry weights up to 200 kg, and can fly for 30 minutes or more, depending on the payload.

The megadrone can be customized in terms of size, configuration and accessories, according to specific customer requirements. Forvola drones can be used in multiple situations, including rescue in dangerous areas, cargo handling in the maritime sector, to support firefighters or civilian protection organizations, to help ensure safety near shorelines, and as a support on construction sites.