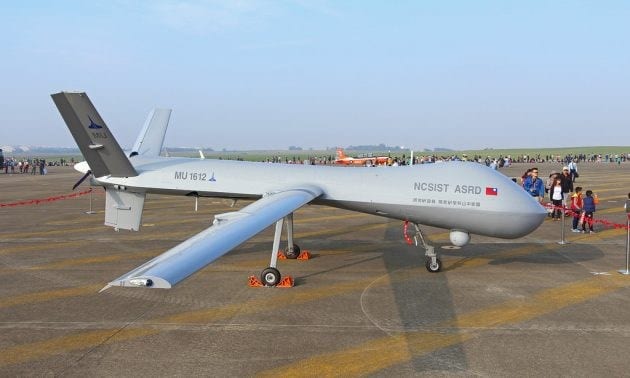 The government of Taiwan has announced that its new defense budget draft includes plans to deploy combat-ready drones to protect its coastline. Tabled to the island’s Legislative Yuan last week, the budget details the prioritization of tactical reconnaissance and armed drones to deter enemy forces on beachheads and coastal areas.

The fleet of future drones will mostly be domestically-produced. They will include Tengyun long-range craft developed by the Chungshan Institute of Science and Technology, as well as anti-radiation missile (ARM) drones being developed as part of Project Jiansiang, according to the ministry.

The Tengyun drones have four weapon mounts compatible with the US-made AGM-114 Hellfire air-to-surface missiles. Such weapons are primarily used for precision strikes at targets within a range of 0.5 to eight kilometers. The new ARM drones can destroy an adversary’s radar systems, or the platforms on which they are installed. It is believed that the Tengyun drones will be modeled after the General Atomics MQ-1 Predator, a remotely piloted aircraft (RPA) once favored by the US Air Force and the CIA.

The Predator was initially conceived in the early 1990s for aerial reconnaissance and forward observation roles, and the long-endurance drone series was subsequently modified and upgraded to carry and fire Hellfire missiles and other munitions designed for offensive operations.

Taiwan’s defense ministry said the indigenous drones would be part of the army’s goal to ensure the annihilation of enemy deployments on Taiwan’s beaches. Precision-strike weaponry including drones fitted with air-to-surface missiles are key to defending beachheads and winning littoral, or coastal, battles and anti-landing operations.