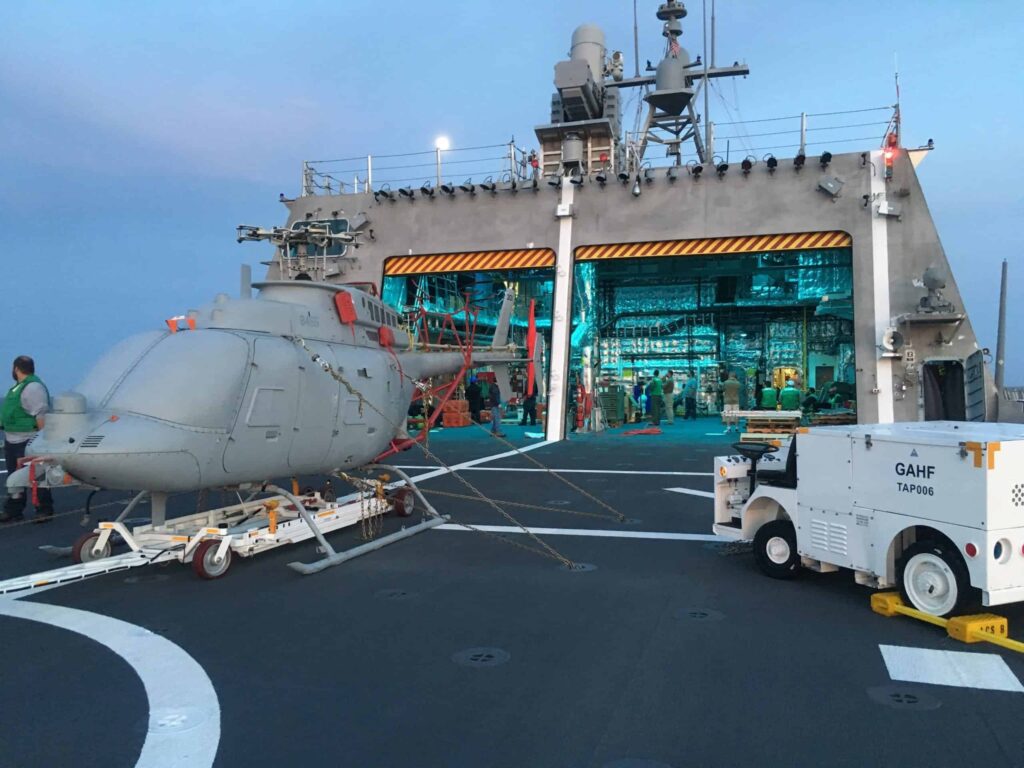 The U.S. Navy has announced that USS Coronado (LCS 4) has begun operational testing of the Navy’s newest unmanned helicopter, the MQ-8C Fire Scout, off the coast of San Diego. The operations are a continuation of previously initiated MQ-8C operational testing, and this next phase is testing the MQ-8C’s ability to operate concurrently with other airborne assets and littoral combat ships. The enhanced capability will provide commanders an improved and integrated intelligence, surveillance and reconnaissance picture.

Coronado is one of four designated LCS testing ships and the ship’s commanding officer says he and his crew are excited to help further advance Navy lethality.

Fire Scout operations are a whole-ship effort, requiring effective coordination between the aviation and surface entities aboard.

“Whether it is ensuring that the data links required are functional, fire team personnel are standing by to respond, or managing the airspace and contact pictures; every single Sailor plays a role in Fire Scout operations,” said Lt. Josh Riley, the ship’s combat systems officer. “These Sailors and this testing will help shape how the surface force will utilize the strengths and advantages that this valuable asset brings to the table in the coming years.”

During Coronado’s 2016-2017 deployment to the Western Pacific, the ship successfully used MQ-8B Fire Scout as an organic sensor to strike a target beyond visual range using a Harpoon surface-to-surface missile.

With that recent success fresh in their minds, LCS Sailors are excited for future employment of the MQ-8C Fire Scout, saying that the newer technology has increased speed, a higher ceiling, over twice the fuel endurance, and an improved payload capacity.

“Operating with the MQ-8C Fire Scout offers unique challenges, but it is the perfect partner to an LCS,” said Lt. j.g. Alex Giltz, Coronado’s auxiliaries officer and one of the few shipboard officers who has operated with both versions of the Fire Scout.

LCS is a high-speed, agile, shallow draft, mission-focused surface combatant designed for operations in the littoral environment, yet fully capable of open ocean operations. As part of the surface fleet, LCS has the ability to counter and outpace evolving threats independently or within a network of surface combatants.