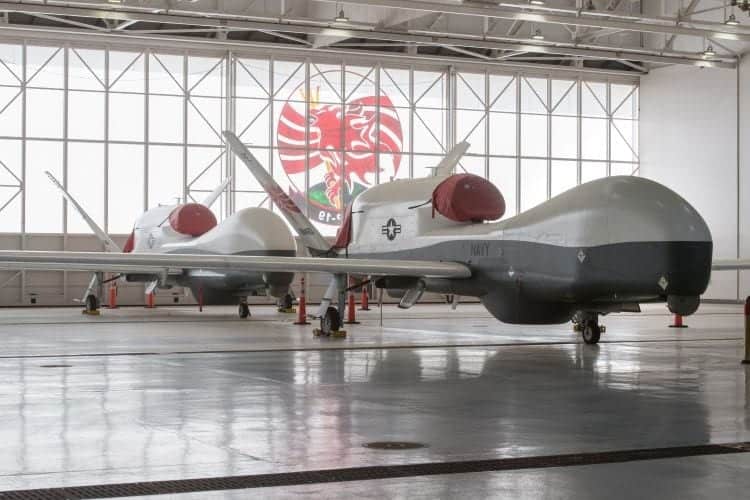 Naval Base Ventura County (NBVC) Point Mugu is home to the maintenance detachment of Unmanned Patrol Squadron (VUP)-19 DET Point Mugu, the Navy’s first unmanned patrol squadron. Maintainers are conducting training and tests on the Triton aircraft before it deploys to Guam later this year.

Point Mugu has also completely refurbished an existing hangar that will accommodate up to four Triton aircraft with its 130.9-foot wingspan. The first two Triton aircraft are located at Point Mugu.

“With each new part of the Triton infrastructure that the Navy stands up, we move closer to making Triton operational and showing the fleet what this remarkable aircraft system can do,” Shaffer said. “I look forward to the day when this hangar is full of activity leading up to the Guam employment.”

“As Naval Base Ventura County’s representative in Congress, I am proud to support the MQ-4C Triton aircraft system,” said U.S. Rep. Julia Brownley, Ventura County. “The Triton is an essential component of the Navy’s future intelligence, surveillance, and reconnaissance capabilities, and a critical program for the continued strength of Naval Base Ventura County and our national security. I have made funding for research, development, and procurement of the Triton a top priority. When fully developed, this program will bring jobs and an economic boost to Ventura County.”

Built by Northrop Grumman, the MQ-4C Triton is an unmanned intelligence, surveillance and reconnaissance aircraft system with an autonomous capability that is piloted from a ground station. Triton can fly for up to 24 hours and reach altitudes of up to 55,000 feet. Flying high above the battle space, Triton provides a critical common operating picture, disseminating images and near-real time video to commanders around the world.