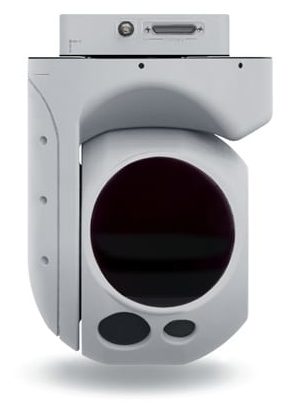 UTC Aerospace Systems (now Collins Aerospace) has announced the release of its new TASE250 optical payload system for small UAS (unmanned aerial system) applications. The TASE250 is part of the company’s existing TASE family of payloads that are operationally proven, having flown hundreds of thousands of hours in harsh unmanned military environments.

At 5.5 inches in diameter, the TASE250 meets the smaller SWaP (size, weight and power) requirements of the U.S. Department of Defense (DoD) and foreign militaries, as well as those of high-end civilian UAS customers. This lightweight, high-performance camera is designed for the DoD Group 1 (up to 20 lbs.) and Group 2 (21-55 lbs.) unmanned segments. The TASE250 provides both longwave infrared (LWIR) and visible imaging solutions, giving operators improved situational awareness in day and night, an all-digital imaging chain for maximized processing capability and an optimized lens design for enhanced object recognition.

Integrated into this system is on-board video processing with image stabilization, overlays, picture in picture (PIP) and enhancement capability. An on-board GPS/INS with integrated geo pointing and ViewPoint tactical PED (processing, exploitation and dissemination) provides operators with the ability to multitask, record and disseminate critical data for use at their fingertips. The TASE250 also includes an optional laser pointer.

“Evolving mission needs require evolving payloads. With the TASE250, military and civilian users now have field-proven imaging capabilities in the smaller size and weight demanded by the new missions,” said Kevin Raftery, vice president and GM of UTC Aerospace Systems’ Airborne ISR business. “Smaller size and weight means these systems can be deployed at lower altitudes and from a variety of platforms.”