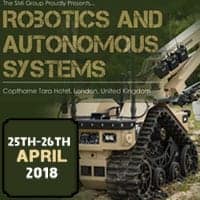 Following the announcement from Endeavor Robotics revealing details of its new Centaur unmanned ground vehicle (UGV), which is the platform chosen to fill the US Army’s MTRS Inc II requirement, SMi is pleased to report that the Vice President of Endeavor Robotics will present at Military Robotics and Autonomous Systems conference this April.

The Centaur UGV is a mid-sized, tracked platform that has been designed to carry out a range of missions, including ordnance disposal, surveillance and reconnaissance, and CBRNE/HazMat detection. Heavier than the company’s well-known PackBot, the vehicle weighs less than 74 kg and can be deployed in under five minutes, according to the company. It has a payload capacity of 68 kg and an operating endurance of up to 8 hours when using standard military batteries.

Delegates at the Military Robotics and Autonomous Systems conference, taking place on 25th and 26th April 2018 in London, can learn more about the new Centaur UGV from sponsor Endeavor Robotics. Endeavor Robotics will be presenting and exhibiting at the two-day event along with QinetiQ, SAFRAN and IAI.

The MTRS II program is one of a number of programmes that have been developed to transform and define the future operations of the US Army’s unmanned ground systems fleet [JANES].

The Centaur UGV can self-deploy from a vehicle known as a Robotic Deployment System (RDS), which can both fit onto the outside of vehicles and can recover the UGV on the battlefield. This is a newly developed technology for the US Army which has never previously been deployed and will allow the operator to remain in the safety of their vehicle during a mission.

Elite experts from the US Army, the US Army Research Laboratory and the USMC Warfighting Laboratory will all be presenting at the two-day conference.

To view the brochure or for more details visit www.robotics-autonomous.com/ustpr