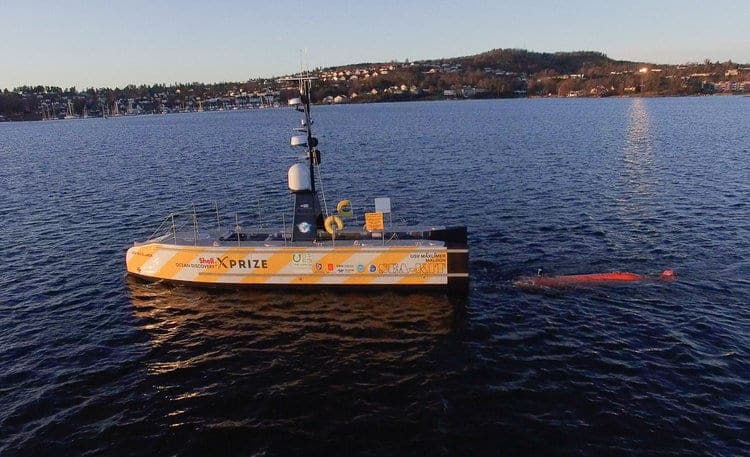 Ocean Floor Geophysics (OFG) has announced that it has supported the GEBCO-NF Alumni Team in its completion of the Technology Readiness Tests of the Shell Ocean Discovery XPRIZE using a combined Unmanned Surface Vessel (USV) and Autonomous Underwater Vehicle (AUV) system. The goal of the XPRIZE challenge is to advance ocean technologies for rapid, unmanned and high-resolution ocean exploration and discovery.

This is a world first using the Hugin AUV and a USV mothership for launch, synchronized autonomous AUV survey operations, and recovery of the AUV back into the USV. The project demonstrated that combined AUV and USV systems are a viable option for future offshore survey and inspection projects.

The Team chose to work together with OFG to integrate the HUGIN AUV Chercheur into the system. Chercheur is a survey and pipeline inspection AUV equipped with a multibeam, camera, sub-bottom profiler, OFG Self Compensating Magnetometer (SCM), water chemistry sensors, and the HISAS 1032, a deep-water interferometric synthetic aperture sonar that was used to collect bathymetric and imagery data for this project.

The USV SEA-KIT Maxlimer was designed by Hushcraft Ltd to act as a surface support vessel for the AUV, including the capacity to launch and recover the AUV and to provide subsea communications and positioning. SEA-KIT is a rugged, impact-safe and self-righting USV that can carry a deployable and retrievable payload of up to 2.5 tons. It has passive motion damping, a stable single-compartment flooding system and a self-deploying and stowing sea anchor to ease and ensure safe operations. The autonomous capabilities of the USV were provided by the K-Mate controller developed by Kongsberg Maritime and the Norwegian Defence Research Establishment (FFI).

In addition to the development of the AUV and USV systems used for data acquisition, the Team developed a complete data processing workflow using Teledyne CARIS and ESRI software allowing all the data products to be delivered within 24 hours. The workflow developed was highly automated from data download to delivery of a complete ArcGIS database of the entire survey area, including HiSAS imagery at 4 cm resolution, multibeam bathymetry, interferometric bathymetry and areas of interest reprocessed HiSAS imagery at 2 cm resolution.

Autonomous AUV seafloor survey, with an AUV launch and recovery (human-in-the-loop), with the USV autonomously tracking the AUV for a complete survey mission while being monitored from a remote shore station, were demonstrated to be a viable option for future offshore survey and inspection projects. The technology, processes and procedures developed for this project are a big step towards larger scale implementation of these concepts.