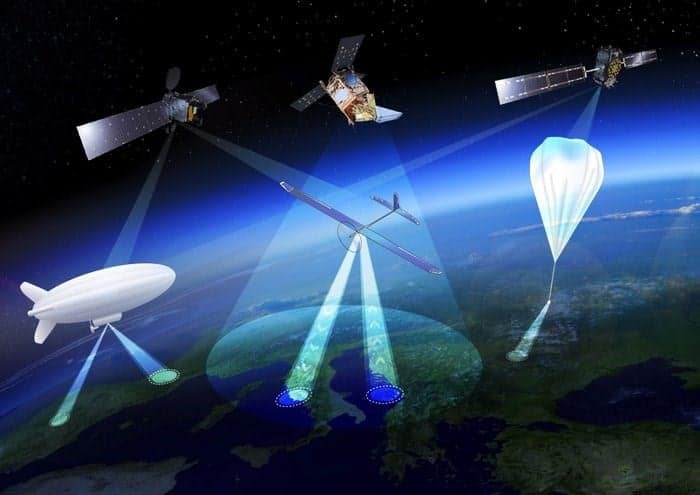 The European Space Agency (ESA) has announced that it is considering extending its activities to a new region of the sky via a novel type of unmanned aerial vehicle (UAV), a ‘missing link’ between drones and satellites.

High Altitude Pseudo-Satellites, or HAPS, are platforms that float or fly at high altitude like conventional aircraft but operate more like satellites – except that rather than working from space they can remain in position inside the atmosphere for weeks or even months, offering continuous coverage of the territory below.

The best working altitude is about 20 km, above the clouds and jet streams, and 10 km above commercial airliners, where wind speeds are low enough for them to hold position for long periods.

From such a height they can survey the ground to the horizon 500 km away, variously enabling precise monitoring and surveillance, high-bandwidth communications or back up to existing satellite navigation services.

Several ESA directorates have teamed up to investigate their potential, explains future-systems specialist Antonio Ciccolella: “For Earth observation, they could provide prolonged high-resolution coverage for priority regions, while for navigation and telecoms they could shrink blind spots in coverage and combine wide bandwidth with negligible signal delay. ESA is looking into how these various domains can be best brought together.”

European companies have already unveiled product lines. For instance, Airbus has developed the winged, solar-powered Zephyr, which in 2010 achieved a world record 14 days of continuous flight without refuelling.

Zephyr-S is designed to fly payloads of a few tens of kilograms for up to three months at a time, with secondary batteries employed to keep it powered and aloft overnight. A larger Zephyr-T version in preparation will support larger payloads and power needs.

Thales Alenia Space is meanwhile preparing the lighter-than-air Stratobus, with its first flight expected in 2021.

The buoyant Stratobus airship can carry up to 250 kg, its electric engines flying against the breeze to hold itself in position, relying on fuel cells at night.

Many other firms are also developing vehicles, payloads and services. Last month saw them gathered at ESA’s inaugural workshop, together with representatives of potential customers, including the European Defence Agency, Frontex – the EU agency tasked with Europe’s border management – and EU Copernicus environmental monitoring services.

“This was the first meeting of its kind in Europe, with more than 200 HAPS experts” explains Juan Lizarraga Cubillos, from ESA’s telecoms area.

“We heard from them on the needs, opportunities and critical issues within the field, particularly as a complement for existing satellite services, to start preparing a future ESA programme.”

ESA regards the vehicles as a valuable way of establishing applications that complement its satellites while also accelerating space technologies through early, high-altitude flight testing.

The point was also made that market acceptance of HAPS would come down to their efficiency and cost-effectiveness – and the best way to show that would be through demonstration projects.

“We have to fly them,” remarked Alvaro Rodriquez of the EU’s Satellite Centre. “The technology is there, all the ingredients are there, now it’s time to mix them into a nice recipe.”