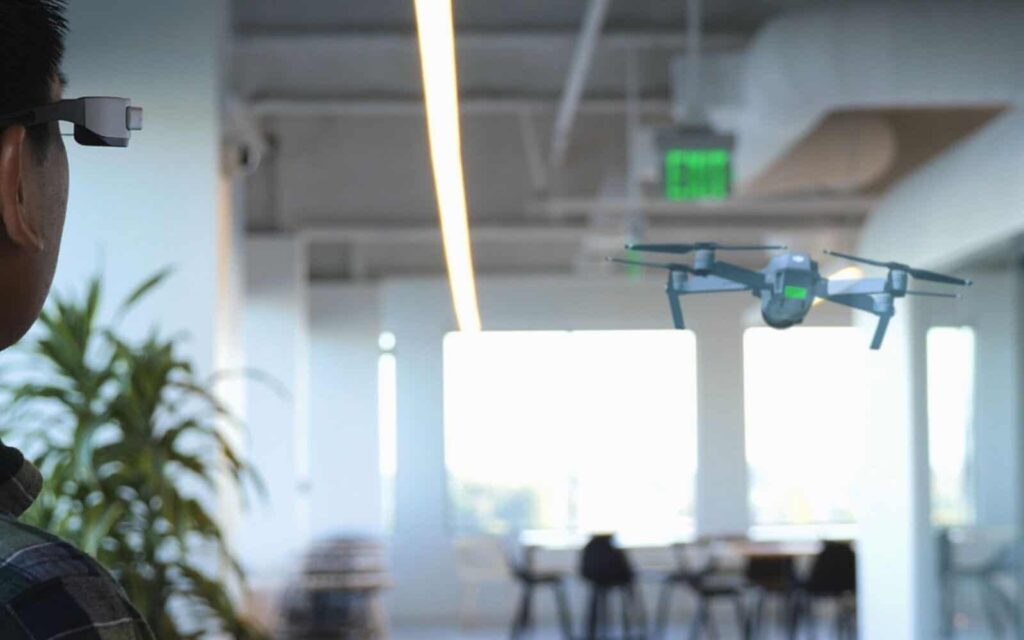 The application allows a user to fly a 3D digital drone in the real world using flight controllers from the latest DJI drones, including the Mavic Pro, Phantom 4, Inspire 2 and Spark. The simulator mirrors the natural, real-world movements of a DJI Mavic Pro, allowing new pilots to learn to fly and experienced pilots to sharpen their skills.

“Augmented reality is set to revolutionize the industry with the ability to create a safer, more productive flight,” said Romsin Oushana of DJI Partnerships. “The hands-free, heads-up experience delivered by the Epson Moverio BT-300 is the ideal way to experience aerial AR.”

The flight simulator experience is viewed through the Epson Moverio BT-300 smart glasses and includes a fly mode and two mini-games for advanced pilots. It will shortly be published on the Moverio Apps Market but can currently be experienced at DJI stores or local drone retailers.

“This is arguably the first mainstream consumer application for augmented reality smart glasses,” said Eric Mizufuka, Manager, New Ventures, Epson America. “The ability to digitally ‘paint the sky’ is a game-changer in the drone market and will usher in an exciting range of applications. We’ve been very impressed with DJI’s updated Mobile SDK and look forward to continuing to invest in new applications and partnerships in this space.”

The application was created by Y Media Labs, a Silicon Valley-based creative technology agency, under the direction of the DJI and Epson Moverio teams.

“We’re excited to partner with Epson and DJI to set the standard for high-value consumer experiences in the AR space by harnessing the power of cutting-edge technology and world-class design,” said Ashish Toshniwal, CEO of Y Media Labs.

The flight simulator is the first application in a series of aerial augmented reality applications being developed by Y Media in partnership with DJI and Epson. A full-featured AR app for the Epson Moverio smart glasses is currently being designed to enhance the safety, productivity and capabilities of DJI drones for hobbyists and professionals alike.

Watch a video demonstration of the flight simulator app below: