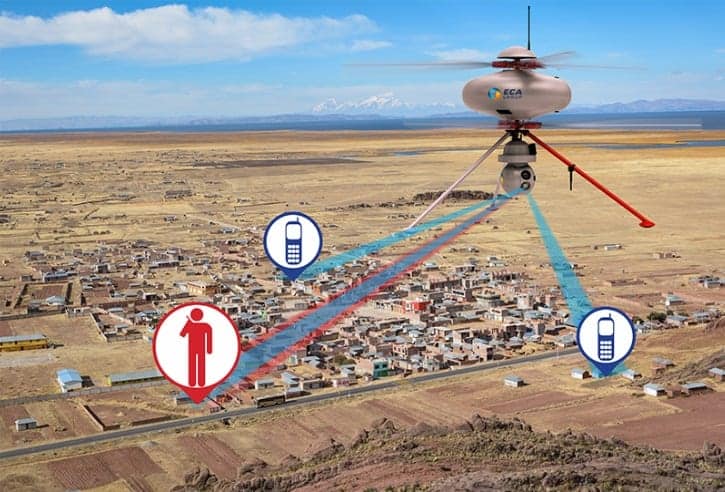 ECA Group, a developer of robotics for challenging environments, has announced its new IMSI-Catcher signal intelligence module designed to integrate with the company’s IT180 mini-UAV (unmanned aerial vehicle)

Highly suited for counter-terrorism applications and intended for use by state agencies, the IMSI (International Mobile Subscriber Identity)-Catcher is a surveillance solution that makes it possible to carry out electronic intelligence missions such as the detection and identification of communication systems.

While the IMSI-Catcher module is already used in ground and airborne vehicles during special operations in the field, its integration in a UAV such as ECA Group’s IT180 promises to facilitate and considerably expand its use.

“Complementary to operations already carried out by aircraft, the UAV will enable detection missions to be carried out discreetly in hard-to-access areas with rapid and flexible deployment conditions,” explained Francis Duruflé, Sales Manager of the Aerial UAV business at ECA Group.

The success of such missions is greatly facilitated by the UAV’s ability to overcome obstacles (roads, forests, mountains or desert areas) and to fly lower, getting closer to the targets.

The IT180 platform is capable of integrating different types of IMSI Catchers to carry out operations in multiple contexts depending on mission, country, regulatory and environmental objectives.

The three essential assets of the IT180 UAV that play a decisive role in an intelligence mission are its 50-minute autonomous flight, a 30-km flight range, and high payload capacity. In addition to the IMSI Catcher, a high-definition camera can be mounted on board the IT180 for collecting additional and detailed information, both electronic and visual.