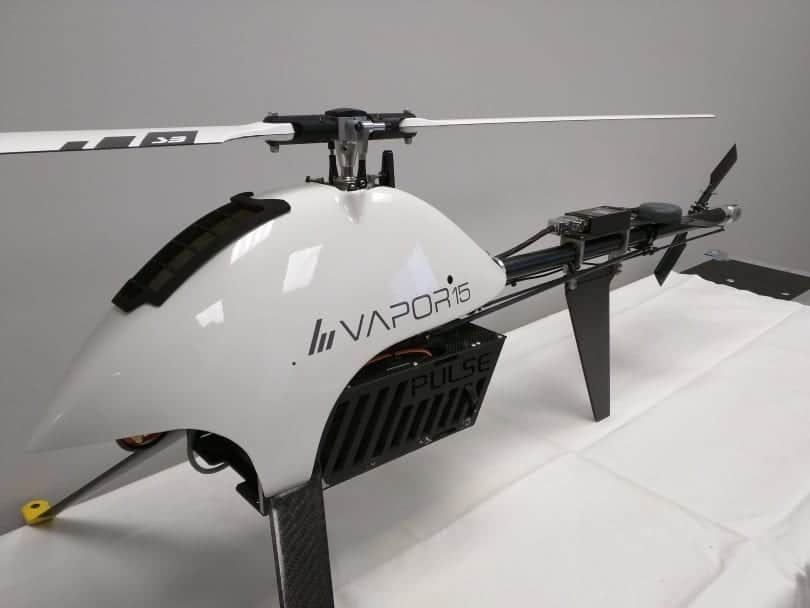 Pulse Aerospace, a developer of multirotor Unmanned Aircraft System (UAS) platforms, has announced the release of two new VTOL UAS, the petroleum powered Radius 65 and electric Vapor 15. By expanding beyond the company’s current Vapor 35 and Vapor 55 offerings, Pulse covers a broad application range for helicopter UAS. The Radius 65 incorporates a petroleum power plant to achieve an endurance of up to five hours in cruise and hover missions with a useful load of 25 lbs. Vapor 15 will carry 2.5 pounds of payload for 1 hour in a small, easy to transport form factor. Both systems offer the same payload flexibility, safety features, precision full-authority automatic flight control system, and ease of use as Vapor 35 and 55.

The Radius 65 was developed to serve the demands of military and industrial customers requiring the take off / landing, hover, and heavy payload capabilities of the Vapor 55 with added range for extended ISR, Lidar, survey, and delivery missions.

“Pulse’s customers continue to see expanded use cases for rotorcraft design that cannot be serviced by multi-rotor and fixed wing systems. Our HeliSynth optimization technology enables the rapid development of platforms that carry best in class payloads that are applicable in each of these markets,” explained Aaron Lessig, Pulse’s CEO. “The Vapor 15 targets ISR and mapping missions without the limited endurance and payload weight associated with similarly sized multi-rotor and fixed wing UAS, or the high cost of larger systems.”

“The market is recognizing the limitations of current solutions and is looking for enhanced capabilities for high-value applications across a range of mission types. The requirement of payload flexibility, precision, and endurance aligns directly with Pulse’s offerings,” commented Lance Holly, Pulse’s Vice President of Engineering. “Pulse’s technical advantages have allowed the company to compete very strongly for applications requiring robust automatic flight control, low-level flight, hovering or vertical takeoff. And with UAS in Groups 1, 2, and 3, customers can operate across a full range of mission types while maintaining operational efficiency, safety, and simplify afforded by a single user interface.”