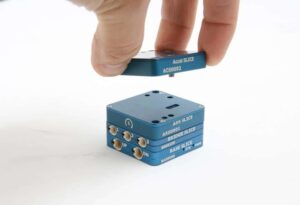 DTS, a developer of data recorders and sensors, has announced its new ultra-small SLICE MICRO and NANO data recorders, designed for size- and weight-constrained applications such as unmanned aerial vehicles (UAVs).

Modular in design, the NANO, the smaller of the two, has a footprint of 26×31 mm. The standalone SLICE systems include a microprocessor, excitation, full signal conditioning and sampling up to 500,000 sps/channel. SLICE can record for hours and direct-writes data to 16 GB flash memory. SLICE delivers precision shock and vibration data in low and high temperatures, high altitudes and low pressure environments (meets MIL-STD-810-E) and is 500 g shock rated with a 5,000 g option available.