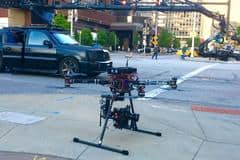 KDE Direct has confirmed that its industrial drone components were fitted to a heavy lift multicopter drone used to film scenes for the movie Fate of the Furious – the first US film by NBC Universal to feature cinematography shot by a drone.

Shot on three islands, including action sequence drone scenes in Georgia and Cleveland, KDE Direct industrial brushless motors and components were onboard an Aerobo X8 heavy lift multicopter drone used in the filming, ensuring that the film’s car chases, stunt performance sequences, and special effects were as intense and vivid as possible. The heavy lift multicopter drone flew through the chaos to capture an impressive variety of dynamic action scenes.

The rapidly growing drone market has presented a plethora of new opportunities for filmmakers. Today, aerial shots are more attainable (and much cheaper) than ever before. Today the Federal Aviation Administration (FAA) allows the use of drones for aerial photography companies working alongside Hollywood studios. High-definition cameras are getting more durable and compact, allowing for higher quality cinematography. Custom drones can now use IMAX 3D, allowing for 6K quality aerials.

In addition to heavy lift, many of today’s drones smaller and lighter than a textbook, allowing them to reach places humans (and certainly helicopters) couldn’t get to. Drones in the air are approximately 10% of the cost of helicopters. By capturing previously unattainable shots, and shots that once cost thousands of dollars per day thanks to pricey helicopters, a slew of new cinematic possibilities has been unleashed.

As an industry leader in component design and production for UAV and multi-rotor systems, KDE Direct is pleased to remain the leading choice amongst aerial cinematographers and commercial producers who depend upon industrial quality and performance. KDE Direct heavy lift brushless motors, carbon fiber propeller blades and specialized electronic speed controller (ESC) systems and software have set the standard in the multi-rotor industry.