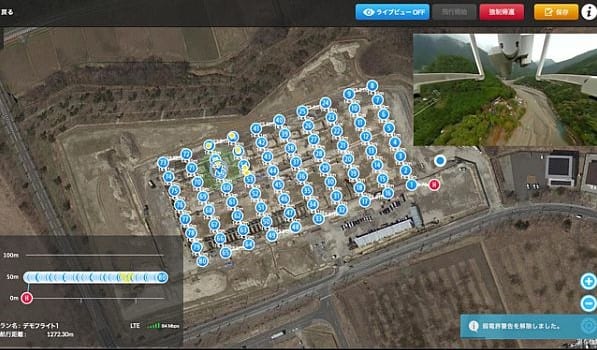 Terra Drone and telecommunications operator KDDI have announced the completion of their new 4G LTE control system, which allows operators to control drones via an LTE network. The system also manages the information on each drone and operator and provides detailed logs of each flight.

Flight plans will be created via the system by setting the altitude of each optional flight point on an online map. During the flight, control instructions based on the flight plan are transmitted to a drone through the LTE network.

The system also allows operators to watch real-time flight images and control drones remotely by sight. The network allows the drone to respond to sudden changes to flight routes and execute a forced return in case of emergency. Furthermore, operators can monitor and control images and survey data captured by the drone.

Prior to the flight, operators can set up a ring-fenced 3D area which the drone will automatically re-enter even if it is forced out of the zone by rain, wind or a technical issue.

Terra Drone has also developed and started to use its “Terra UTM” unmanned traffic management system, and is planning to promote international standardization of the system with the help of UTM specialist firm UNIFLY. As with the 4G LTE control system, Terra Drone utilized KDDI’s 4G LTE network and its base stations.