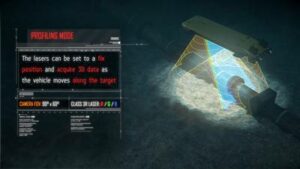 Kraken Sonar has announced that its subsidiary, Kraken Robotik GmbH, will introduce its new SeaVision system at the Ocean Business conference in Southampton, UK.

SeaVision is an RGB underwater laser imaging system that offers the resolution, range and scan rate to deliver dense full colour 3D point cloud images of subsea infrastructure with millimetre accuracy in real time. The initial system is designed for deployment on underwater robotic platforms such as Remotely Operated Vehicles (ROVs) and Autonomous Underwater Vehicles (AUVs). A hand-held diver system is planned for release in the future.

In recent years, 3D imaging sensors have increased in popularity in fields such as human-machine interaction, augmented reality, cartography and movies. These sensors provide raw 3D data that is processed by imaging software to obtain 3D volumetric information. This workflow is known as 3D reconstruction and is a tool that to date has been primarily used in terrestrial and aerospace applications.

However, the ability to generate accurate 3D reconstruction of underwater infrastructure is an important requirement for commercial, military and ocean research applications. While sonar is the technology of choice for covering large areas, 3D laser systems such as Kraken’s SeaVision provide significantly higher resolution and accuracy at inspection ranges of under 10 metres.

SeaVision uses a full colour laser scanning process that is repeated thousands of times per second to generate coordinate values of millions of points on a reflected surface. The coordinates and intensity associated with each reflected laser pulse are processed in real time to generate an ultra high resolution point cloud. SeaVision produces over 300,000 colored points per second and can reconstruct a 3D object in real-time with typical spatial accuracy of less than 2 millimetres. These datasets can be used to create highly detailed models for 3D visualization, asset management, artificial intelligence and predictive analytics.

Unlike other underwater laser scanning systems, SeaVision does not have any externally moving parts. It is integrated in a compact twin pod configuration with flexible mounting options and localized auto-calibration. This enables the system to be mounted at-sea without the need for a specialist or technical support.

Another unique feature is the application of six laser lines in Red, Green and Blue (RGB) colours to reproduce full colour information. All data is processed on-board in real-time and can be directly streamed and viewed topside or stored on the system’s multi-terabyte solid state drive.

SeaVision can also be used in profiling mode, where the lasers automatically maintain optimal scan angles and acquire colour 3D data as the ROV or AUV platform moves along the target.

Dr. Jakob Schwendner, Managing Director of Kraken Robotik GmbH, said, “3D laser scanning unlocks the potential of underwater surveys for subsea asset assessment. SeaVision enables the existing conditions of underwater assets to be captured as millions of data points, which can then be imported into 3D modeling software for creating realistic, to-scale images of the asset. The data available in 3D models can help improve decisions. During meetings and evaluations, 3D models will benefit both technical and non-technical people because they can easily interpret the model. The level of detail provides more useful information that helps in easy visualization and advanced analysis.”

Karl Kenny, Kraken’s President and CEO, said, “SeaVision is a very innovative and cool product. Our scientists and engineers have done a great job on its development. The combination of SeaVision with our sonar and underwater robotics technology will become a valuable tool for subsea asset management. We expect it will enable autonomous, real-time, millimetre resolution 3D modeling, change detection and predictive structural integrity assessment. It has an industry changing price and performance value proposition that will deliver improved safety, higher operating efficiencies and reduced costs for commercial, military and ocean science applications.”