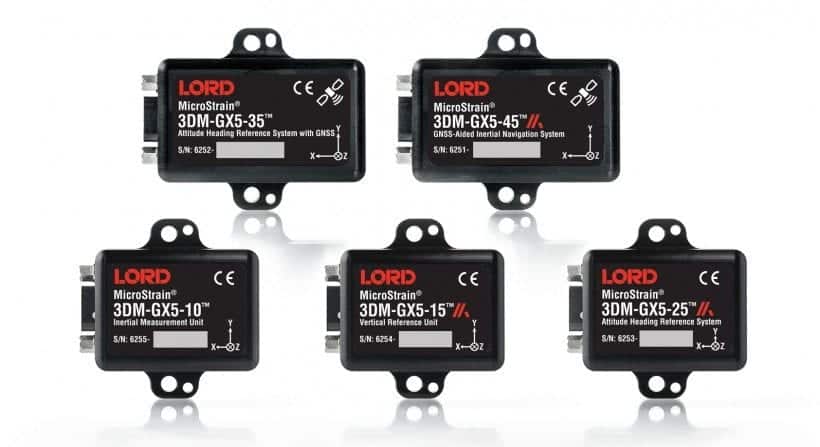 LORD Sensing MicroStrain has announced that it has expanded its portfolio of sensors for unmanned and autonomous vehicles for air, land, and sea with the introduction of the 3DM-GX5 family of inertial sensors.

“We have a large portfolio that shares the same software and protocol, allowing customers to move up and down the product line where they need varying levels of precision with MEMS Inertial Sensors or GNSS,” says Andy Winzenz, Commercial Director, LORD Sensing. “Customers can stay within the LORD family and dial into their needs. LORD continues to develop its family of products using the same backbone and backwards compatibility of previous generations.”

The latest generation of LORD’s inertial sensor is an excellent match for measuring attitude (pitch, roll and yaw), position (latitude and longitude), and velocity in a variety of applications including antenna pointing, platform stabilization, flight tracking, navigation and regime monitoring. The GX5-45 GNSS/INS allows a greater degree of precision by moving through terrain in 3D with a GNSS-aided navigation system when a GPS signal alone is not accurate enough.

Key upgrades from the GX4 line include improved performance through in-situ heading calibration. Automatic magnetometer calibration and anomaly rejection eliminate the need for field calibration. The sensor is fully calibrated, temperature-compensated, and mathematically-aligned to an orthogonal coordinate system for highly accurate outputs.

The GX5-45 features extremely stable and low-noise gyros, a new accelerometer with noise densities as low as 25μg/√Hz, a multi-constellation GNSS receiver, and M7 and M4 dual Cortex processors running a new Auto-Adaptive Extended Kalman Filter. The Kalman Filter has been proven to provide outstanding attitude accuracy, with almost negligible roll error during turns and other sudden course shifts.

“The GX5’s footprint is the same as its predecessor at approximately 44 mm x 36 mm x 11 mm. and it weighs less than 20 grams,” says Winzenz. “That makes it the smallest, lightest, and highest-performing inertial sensor in its class, which allows the payload to be used for more important things such as increased fuel range, heavier camera for better images, and faster servos for antenna pointing. Every gram you can shave off a sensor, you can add in payload.”

The sensor is easily integrated into customer systems, allowing users to quickly drop it into their existing application. It shares the same miniature footprint and API as LORD’s earlier inertial line and has the same mounting, connector and software as well as its high reliability.

“Every GX5 is fully calibrated and temperature compensated by our proprietary third generation robotic calibration equipment,” says Winzenz. “We have optimized these sensors for real-world conditions to maintain reliability and withstand high variations in temperature and shock.”