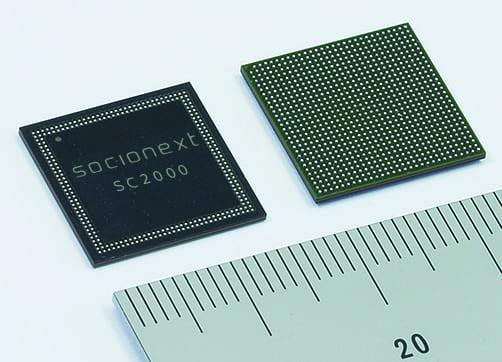 Socionext has announced the introduction of the SC2000, a new image processing IC designed for drones and action cameras. The SC2000 is a new product from the “M10V” series, an eighth-generation version of Socionext’s Milbeaut Image Processors. It features the latest improvement in Socionext’s proprietary Milbeaut image processing algorithm and achieves an optimum combination of high performance and low power consumption.

Since its first release in 2000, the Milbeaut series of image processors has established a track record in a broad range of applications from digital SLR cameras to smartphones, as well as industrial equipment. In recent years, video shooting using drones or action cameras has become more popular, and requirements for higher definition and video image quality are growing rapidly. High-speed processing of increased image data at low power is now an essential for these applications.

The new SC2000 has been developed to meet the challenge by incorporating the latest improvement in Socionext’s proprietary Milbeaut image processing algorithm. Equipped with a digital signal processor optimized for computer vision, it also features advanced functionalities such as 360-degree, real-time panorama stitching with four cameras, image stabilization without mechanical gimbals, and rolling shutter correction. The image processing rate is 1.2 gigapixels per second, three times faster than the company’s previous processor, while the power consumption is as low as 1.7 Watt in typical operating conditions.

Socionext will continue on its evolution and growth of the Milbeaut processors to provide optimal solutions for various camera and imaging applications.

Main specifications of the SC2000 include: