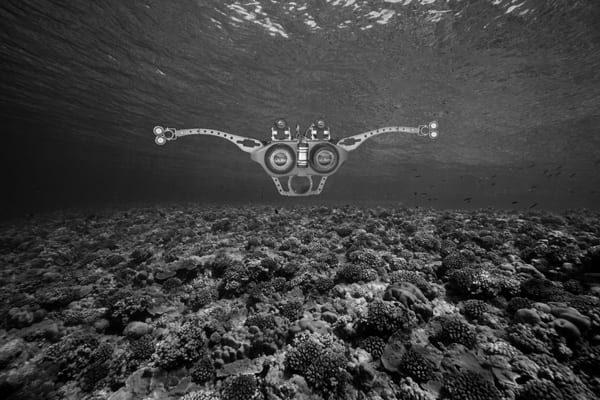 Marine Imaging Technologies (MITech), a developer of underwater optical imaging platforms, has announced that its latest remotely operated vehicle (ROV), the 11th Hour, was able to obtain never-before-seen images of the lower decks of the USS Arizona. The Arizona was a U.S. battleship destroyed in the 1941 Japanese attack on Pearl Harbor.

Working in partnership with the National Parks Service (NPS) Submerged Resources Center, WWII Valor in the Pacific National Monument and the Advanced Imaging and Visualization Laboratory (AIVL) at Woods Hole Oceanographic Institution, the project assisted the NPS in understanding the interior condition of Arizona and uncovered numerous artifacts that tell the story of the men who served aboard the ship when it was attacked on December 7, 1941. These images were shared with several remaining survivors of USS Arizona and will be broadcast in the PBS documentary “Pearl Harbor – Into the Arizona.”

“The honor and privilege of developing technology to explore heretofore unseen areas of USS Arizona on this important anniversary leaves us all speechless,” said Evan J. Kovacs, founder and CEO of MITech and developer of the 11th Hour. “This project was a challenge for all involved, but the payoff was the opportunity to give something back – in the form of these poignant images – to the remaining brave men who survived this devastating attack three-quarters of a century ago.”

The images were revealed to USS Arizona survivors, NPS scientists and managers, and government officials during and after the ROV survey of the USS Arizona in Pearl Harbor. The imagery will also assist the NPS in its efforts to manage this sunken heritage site.

“When the National Park Service had a need for a custom, full featured ROV capable of inventorying, imaging, and sampling inside the WWII battleship USS Arizona, we turned to MITech and the Advanced Imaging and Visualization Laboratory at WHOI,” said Brett Seymour, deputy chief of the NPS Submerged Resources Center. “For years MITech has been supporting NPS underwater operations with innovative and custom platforms for imaging and managing underwater resources. In the case of USS Arizona, AIVL provided full 4K imaging systems to record in the low light interior condition of the ship. MITech supplied the inspection vehicle small enough to access tight hatches and narrow hallways on multiple deck levels. It also had the ability to spool a tether/fiber umbilical to prevent entanglement, and the capacity to collect samples of unknown microbiological samples that may have a direct correlation to the long-term preservation of the ship.”

Out of respect for the nearly 1000 men still entombed in the ship and the danger to divers, the NPS enforces a strict policy that allows no non-official diving and no penetration inside USS Arizona. The NPS also remains true to its obligation of site stewardship, and believes many of the answers to site preservation lie inside the ship. Any research on the site must be done without disturbing the sanctity of the site, and has therefore relied on remote robotic technology to visually examine the upper decks of USS Arizona.

Unlike previous technologies, the 11th Hour was equipped to provide high-resolution documentation, collect vital interior samples and reach deeper into the ship due to its self-spooling hybrid tether. The ROV can carry a 4K 3D camera system provided by AIVL, numerous scientific sensors (such as dissolved oxygen and salinity), and a mechanical sampler for water or sediment samples. This self-spooling capability allowed the 11th Hour to move more freely than other ROVs and penetrate to deeper levels of the vessel. The resulting images and sampling not only captured a glimpse of life aboard USS Arizona, but provided the NPS valuable insight into the unique biological ecosystem inside the ship.

“The growing need for close-up underwater optical inspection systems is enormous. MITech’s 11th Hour vehicle allows us to visualize objects on the sea-floor in ways that we never thought possible,” says William Lange, research specialist and director of AIVL at WHOI. “Having these ‘remote eyes’ on the seafloor and in the interiors of maritime heritage wreck sites such as USS Arizona revolutionizes the way scientists and the public can experience these previously unreachable and unexplored worlds. Remote vehicles like 11th Hour will open up new submerged undiscovered worlds for the benefit of the public while increasing our understanding and exploration of the world’s ocean.”