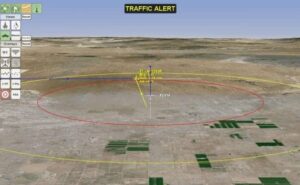 Vigilant Aerospace Systems, a developer of avionics software, has announced that it has become a partner in the development and testing of the UAS Traffic Management (UTM) system being created by NASA’s Ames Research Center in California’s Silicon Valley.

The partnership allows the company to integrate UTM flight plans and traffic data into its FlightHorizon avionics software and provides NASA with access to the company’s flight test data and system development advice and feedback. FlightHorizon provides UAV operators with air traffic visualization and detect-and-avoid commands for integration into the national airspace and beyond line-of-sight flying. The software is based on technologies the company exclusively licensed from NASA’s Armstrong Flight Research Center earlier this year.

“Our goal with FlightHorizon is to offer our unmanned operators the first seamless, single interface solution for flying in both low-density rural or suburban environments using long-range aircraft transponders and also flying in high-density, urban environments using UTM over cellular networks. FlightHorizon will deliver the same user interface and safety assurance, wherever you fly,” said Kraettli L. Epperson, CEO of Vigilant Aerospace.

After meeting in Silicon Valley with Parimal H. Kopardekar, manager of NASA’s Safe Autonomous Systems Operations project and leader of NASA’s UTM efforts, Vigilant Aerospace joined the UTM program as an official partner. Other partners include Amazon and Google, both of whom are developing commercial drone operations and are contributing test data to the UTM program.

“With the addition of UTM interactions, we can provide a complete end-to-end management environment in a single software package, reducing time, cost and complexity for our users,” said Epperson.

The UAS Traffic Management system is designed to enable safe low-altitude civilian UAS operations by providing operators information needed to maintain separation from other aircraft and by reserving areas for specific routes, with consideration for restricted airspace and adverse weather conditions.