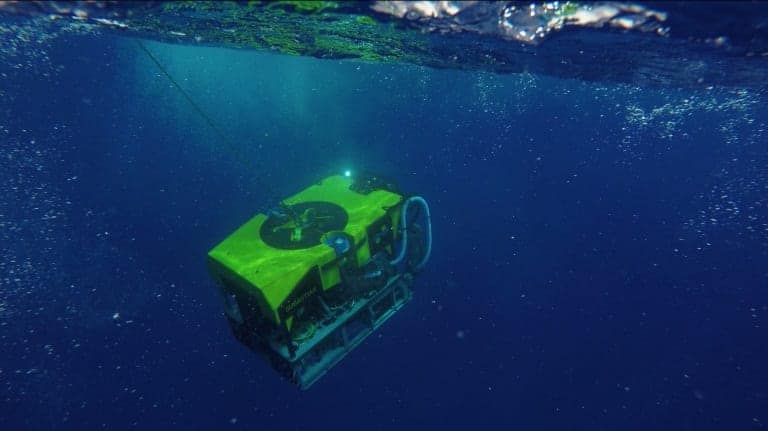 The Schmidt Ocean Institute (SOI) has announced that it has completed a month of rigorous testing of its new Remotely Operated Vehicle (ROV) SuBastian in the open ocean off the island of Guam in the western Pacific. The testing and integration of the new ROV was carried out from aboard SOI’s 272 foot oceanographic research vessel Falkor.

The 25-day testing placed ROV SuBastian in real-world conditions, demonstrating its functionality as a modern research tool with innovative systems. The ROV tests and trials included 22 dives and more than 100 hours underwater. Now that the vehicle has been tested, the team is working on making tweaks and improvements so that SuBastian is ready for its first research cruise later this year, visiting the Mariana Back-Arc in Guam. The 4K high-resolution video footage collected with SuBastian will be openly shared with scientists and interested public around the world.

Wendy Schmidt, co-founder of Schmidt Ocean Institute, has watched SuBastian go from concept to a full-functioning vehicle. “I am very proud of what our team has been able to accomplish in the past year. With ROV SuBastian, we will help make life on the ocean floor real to people who will never visit the sea, so they, too, can begin to appreciate the importance of ocean health and make the connection between life in the deep sea and life on land. You don’t have to be a scientist at sea to recognize the importance of the marine environment, and we are only at the beginning of our understanding. We never anticipated discovering the world’s deepest living fish, the ghostfish, back in 2014, and are excited about the life we will discover next.”

The ROV is connected to an umbilical tether that powers and transfers data for live video telepresence operations, resulting in SuBastian’s ability to potentially stay submerged and explore for multiple days at a time. This is the first submersible vehicle that SOI, founded by Eric and Wendy Schmidt, has designed and built. ROV SuBastian was built to meet the needs of scientists aboard Falkor, while considering the well-being of the entire marine environment. The ROV is designed to go to depths of 4,500 meters (2.8 miles), and will be suitable to support high resolution seafloor mapping, photomosaicing, video and image gathering, and collections of rocks, animals, and seawater samples. SuBastain is equipped with a versatile array of power and data interfaces to enable integration of a wide range of add-on deep sea instruments and samplers that oceanographers may need to support their deep sea research.

Schmidt Ocean Institute provides collaborating researchers and scientist’s free access to research vessel Falkor, as well as expert technical support in exchange for a commitment to openly share and communicate the outcomes of research, including the raw observations and data. With many ROV research cruises foreseen through at least 2018, there certainly will be lots to learn with SuBastian.

Data collected using SuBastian will be openly shared with the public and interested researchers. “This is just the start of SuBastian’s life,” said ROV Project Manager David Wotherspoon, “The team is incredibly focused and ready to put SuBastian to use. SuBastian will now be used by scientists to investigate the deep sea, acting as eyes, ears and hands miles beneath the ocean surface.”