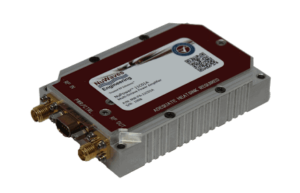 The NuPower 11C01A model will replace the NuPower Multi-Octave Power Amplifier model, delivering a minimum of 10 Watts, and typically 15 Watts, of RF power from 225 to 2400 MHz when driven with a 0 dBm (1 milliwatt) RF input signal. Featuring power efficiency in the 25% to 45% range, and 40 dB of RF gain, the NuPower 11C01A provides high-efficiency RF amplification for a variety of transmitters, transceivers and data links that do not require linear performance.

The PA’s upgraded rugged aluminum chassis, at 3.00” x 2.00” x 0.65” in size, provides an additional 25 degrees Celsius (C) of operational headroom with its new +85 degrees C maximum baseplate temperature rating. Additionally, the chassis maintains the footprint of the original, allowing for drop-in compatibility between the two units. The standby to transmit switching speed of less than 2 microseconds allows the user to rapidly switch between the operating modes, conserving energy between transmit cycles in power-limited applications such as unmanned aircraft systems (UAS). Further improvements include a broad supply voltage range of +11 to +32 VDC, supporting an array of RF communications, telemetry and electronic warfare applications, including systems running on battery power.

“Our second generation broadband Multi-Octave Power Amplifier module follows in the footsteps of our flagship L- & S-Band Solid State PA (the 12B01A), offering robust RF performance in a small package,” said Jeff Wells, President and CEO of NuWaves Engineering. “Increased production efficiency and strict quality control measures under AS9100C have allowed us to manufacture, test, and deliver product to the Warfighter faster than ever.”