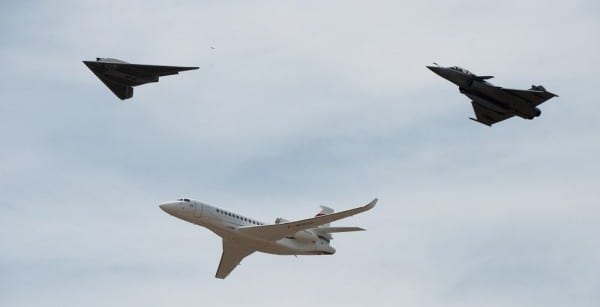 The nEUROn unmanned combat air vehicle demonstrator has flown at an air meet at Istres. The event was organized by teams from Dassault Aviation, along with the French defense procurement agency DGA and the French Air Force.

The demonstration, lasting around 15 minutes, was the first time in world aeronautical history that a ground-controlled stealth aircraft has flown in public.

After takeoff, the nEUROn was joined by a Rafale and a Falcon 8X. The three aircraft flew past in formation at an altitude of 150 meters above the Istres runway at 350 km/h, less than 400 meters from thousands of spectators. This flying display, in a limited airspace, represents a real achievement, both technically and in terms of flying skills.

“This formation of three aircraft illustrates the technological expertise necessary for tomorrow’s aeronautical projects. It also contributes to the centennial celebrations of our Group, which has been designing, building and supporting civil and military aircraft since 1916,” declared Dassault Aviation CEO Eric Trappier.

The nEUROn team is the first outside of the United States to have designed, built and flown a stealthy unmanned combat air vehicle demonstrator and the first to have submitted it to a comprehensive test program, including tests involving operational detection systems (radar and infrared), as well as the launch of a weapon from an internal bay at high speed.