textron-systems-unmanned-systems News By Mike Ball / 11 May 2016 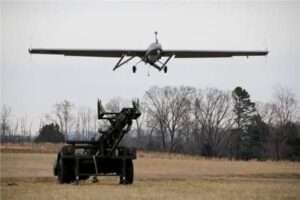 Textron Systems Unmanned Systems, a subsidiary business of aerospace and defense firm Textron Inc., has announced the construction, completion and grand opening of the company’s new unmanned aircraft system (UAS) training and maintenance facility, the Unmanned Systems Service & Support Center, in Blackstone, Virginia. To celebrate the opening of the expanded Unmanned Systems Service & Support Center, Textron Systems hosted tours and held a ribbon-cutting ceremony at the facility. Attendees also watched as the company demonstrated the Aerosonde Small Unmanned Aircraft System, as well as the Shadow M2 – which both operate under Federal Aviation Administration Certificates of Authorization (COA) at the facility.

With assistance from the Virginia Tech Mid-Atlantic Aviation Partnership , which obtained the COA for aeronautical research, as well as UAV Pro, Textron Systems is moving its training and global service facility from its original location on Fort Pickett, Va., to a new, larger and comprehensive Unmanned Systems Service and Support Center. The new facility will continue to house the company’s schoolhouse for operators and maintainers, as well as the sustainment operations for its Aerosonde SUAS. The facility also supports research on UAS integration into national airspace through its COAs for the Aerosonde SUAS and Shadow M2.

Located on the Allen C. Perkinson Airport/Blackstone Army Airfield taxiway, the new 14,700 square-foot facility will span across two buildings and expand Textron Systems’ space by approximately 1,700 square feet. The new facility includes three classrooms with capacity for 12 students in each, as well as two simulator rooms that can operate up to 12 total flight simulators. The facilities also include an engine test cell, air vehicle test cell, along with space for air vehicle assembly, composite and engine maintenance, repair and operations. The new facilities also have access to the airport for UAS operations directly outside the facility doors. Additionally, the buildings have an expandable and modular design that allow for growth with business and product changes.

“The grand opening of a larger Unmanned Systems Service & Support Center is important to us because the UAS industry is growing – and we are excited to expand our location to accommodate this growth,” says Textron Systems Unmanned System Senior Vice President and General Manager Bill Irby. “With this expansion, we have the opportunity to train more operators, maintain additional UAS and continue our research on integrating UAS into national airspace.”

Textron Systems’ Aerosonde SUAS has amassed more than 130,000 flight hours in commercial and military operations around the world. Among these are scientific and meteorological missions, from the eye of hurricane Noel, to amassing more than 1,300 flight hours over the Arctic and Antarctica. The system incorporates the purpose-built Lycoming EL-005 engine and is a multi-mission capable UAS that offers the ability to simultaneously support electro optical/infrared full motion video, communications relay, Automatic Identification Systems, and Electronic Warfare variant payloads from a single sortie.