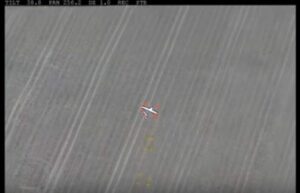 The Penguin C – a fixed wing unmanned aircraft with a 3.3m wingspan and a single-cylinder engine – was fitted with an Epsilon EO HD gimbal with a Hitachi DI-SC120R sensor and onboard image processing. Flying at high speed at an altitude of 400m, it successfully tracked its target which was flying at an altitude of 300m.

The video can be seen below: