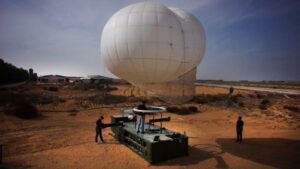 RT LTA Systems Ltd., a leading designer, developer, and manufacturer of the Skystar™ family of aerostats for use in intelligence, surveillance, reconnaissance, and communications applications, has introduced the SkyStar 330 system. The new system is based on the former SkyStar 300 platform which has been operational since 2007 and gained over half a million operational hours.

Major (Ret.) Rami Shmueli, RT LTA’s CEO: “The Skystar 330 upgrades the capabilities of the first member in the SkyStar family – the SkyStar 300. With the new technology that is introduced into this system, we were able to deliver a high-end system for military and HLS applications. During the last two years, more and more costumers discovered the benefits of using Aerostats for intelligence and communications applications. According to the research market company MarketsandMarkets, the Aerostat world market will reach to about $10 billion by 2020, but I believe that in an era of decreasing defense budgets worldwide, the cost-effective Aerostat systems share can be even bigger”.

The Skystar 330 is a real-time tactical surveillance helium-filled aerostat that is tethered to a ground system (inflation & mooring system). Designed to provide its users with persistent, medium-long range, real-time tactical Intelligence, Surveillance, Target-Acquisition and Reconnaissance (ISTAR), the system transmits surveillance video and data outputs to a ground control station. Lifting the system’s sensor to an average altitude of up to 1,500 ft AGL, Skystar 330 is an optimal system for camp and force protection, counter IED, area capture and situational awareness.

The aerostat can be operated continuously, at wind velocity up to 40 knots, with a break of 20 minutes once up to 72 hours, to enable helium refill. The system is characterized with a very fast deployment and redeployment, and it is highly transportable onboard standard general purpose trucks.

The Skystar 330 system features a wired data link system on optic cable tether for receiving payload orientation uplink commands and transmitting downlink video images and data. The aerostat Tether Cable also carries the power supply and an un-jammable, two-way communications channel. An additional RF component enables the system to transmit its output and to be controlled from remote sites and to share information.

The Skystar 330 system can be optionally equipped with RF communications according to customer’s request.