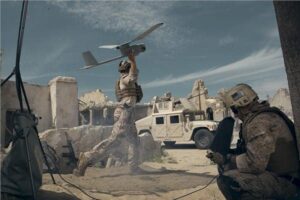 AeroVironment, Inc., a manufacturer of unmanned aircraft systems (UAS), has announced that it has been awarded a firm-fixed-price contract from the United States Army to supply initial RQ-11B Raven UAS to seven allied nations through the Foreign Military Sales (FMS) program. The contract totals $18,485,495 and includes supply of spare parts and contractor logistics services.

The AeroVironment Raven is a widely used unmanned aircraft system throughout the world. It is designed for rapid deployment and high mobility for applications requiring low-altitude intelligence, surveillance and reconnaissance. With a wingspan of 4.5 feet and weighing 4.2 pounds, the hand-launched Raven provides aerial observation for both day- or night-time missions, at line-of-sight ranges up to approximately 6.2 miles (10 kilometers).

“Allied forces around the globe are increasingly relying on AeroVironment as the go-to source for small UAS that deliver powerful insight, on demand for valuable, real-time situational awareness – whenever and wherever needed,” said Kirk Flittie, AeroVironment vice president and general manager of its Unmanned Aircraft Systems business segment. “Our systems help military personnel and enterprises operate more safely and effectively in some of the most challenging conditions and places on earth.”