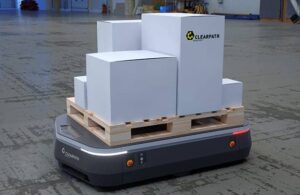 Clearpath Robotics, a developer of field and service robotics, has announced the release of OTTO, the company’s first self-driving warehouse robot, at RoboBusiness 2015. OTTO is designed for intelligent heavy-load transport in industrial environments to deliver improved throughput and decreased operating costs.

Modern factories and warehouses need to be reconfigurable, responsive, and efficient to survive. Designed to address these conditions, OTTO uses the same underlying self-driving technology popularized by the Google self-driving car. The system delivers dynamic and efficient transport in increasingly congested industrial operations. Traditional material handling systems require costly and rigid changes to infrastructure, cannot adapt to a changing environment, and are not safe for collaboration with warehouse personnel. OTTO does not rely on external infrastructure for navigation, making implementation hassle-free and highly scalable. It can transport 3300 lb loads at speeds up to 4.5 mph, while tracking along optimal paths and safely avoiding collisions.

“North American manufacturers are constantly under pressure to find new ways to gain an edge against low-cost offshore competition. Traditional automation is saturating. But what about the more complex tasks too difficult or expensive to automate?” said Matt Rendall, CEO and Co-Founder of Clearpath Robotics. “We created OTTO to reinvent material transport and give North American manufacturers a new edge.”

Applications for OTTO include moving pallets in a warehouse or cross-dock, and kitting or assembly line delivery. OTTO units are currently deployed in five test facilities, the first of which belongs to General Electric.

GE has collaborated with Clearpath on service robot development since 2013 and recently became one of Clearpath’s first OTTO customers. Clearpath has also announced that GE Ventures has become a strategic investor in the company for an undisclosed sum.

“We believe robotics will drastically improve the industries that GE serves,” said Ralph Taylor-Smith, Managing Director of GE Ventures. “We look forward to further partnering with Clearpath and exploring the role large-scale service robots may play for us and for our customers in the future. This Clearpath investment from GE reflects a deepening of the industrial partnership in advanced manufacturing and field service operations with self-driving vehicles and service robots.”

“GE is one of the world’s most powerful and innovative brands,” said Rendall. “We are honored to partner with GE and we look forward to shaping the industry with them.”