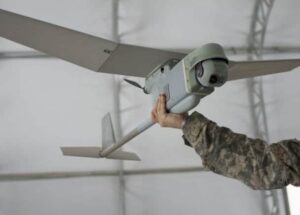 The new configuration of the Raven R-11B Small UAS with the Gimbal payload. (Image: US Army)

The U.S. Army confirmed last week that selected units had received an upgrade to their RQ-11B Raven UAS, to include a new gimbal payload.

“The Gimbal system replaces the old, fixed camera, where the operator had to move the bird around to see different directions,” said Spc. Gilbert Reyna, a San Antonio-native and cavalry scout with Comanche Troop, 6th Squadron “Saber,” 9th Cavalry Regiment, 3rd Armored Brigade Combat Team, 1st Cavalry Division. “With the new payload, you can now simply rotate the camera 360 degrees in a matter of seconds.”

Throughout the week, Soldiers swapped out their former systems for the new Gimbal payload, and received familiarization training to quickly learn how to successfully operate the equipment, said Sgt. Shane Burroughs, a unit supply specialist with Troop C, 6-9 Cavalry.

“This upgrade will make the whole reconnaissance world more effective,” said Burroughs, a Fort Bragg, North Carolina-native. “It will provide better capabilities to units as a whole.” 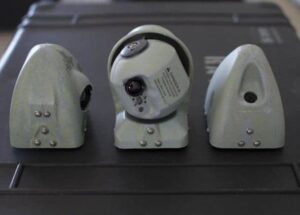 The new Gimbal camera system allows for a nearly 360-degree view in both daylight and nighttime conditions. (Image: US Army)

“We are getting better surveillance now when we launch the Raven,” the Wichita Falls, Texas-native said. “We no longer have to bring the Raven down to switch from daytime to nighttime infrared cameras, as it has both capabilities. We can run twilight missions all at one time, and switch between white hot, black hot, and colored cameras all in one setting.”

“The last system had stationary front and side cameras,” he said. “This replaces both front and side mounts. It makes it easier for Soldiers to stay on target.”

The AeroVironment Raven, the most widely used UAS in the world today, is a lightweight solution designed for rapid deployment and high mobility for military applications requiring low-altitude surveillance and reconnaissance intelligence. The AeroVironment Puma AE is a small UAS designed for land-based and maritime operations. Capable of landing in salt water or on the ground, the Puma AE empowers the operator with a level of operational flexibility never before available in the small UAS class.

“Sustaining the Army’s large fleet of Raven and Puma AE systems ensures that soldiers continue to have the most effective, reliable and adaptable small UAS available to support them wherever and whenever required,” said Kirk Flittie, vice president and general manager of AeroVironment’s UAS business segment. “These contracts assure that American soldiers can continue to rely on our combat-proven solutions to deliver powerful insight, on-demand, that helps them operate more safely and effectively.”