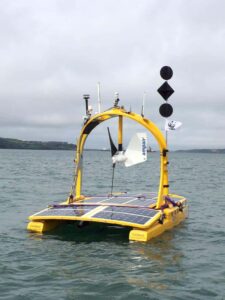 The National Oceanography Centre (NOC) has begun the latest in a series of ambitious marine robotic vehicle trials off the UK coast. Working in partnership with the World Wildlife Fund (WWF), NOC has deployed a submarine glider and an autonomous surface vehicle into the Celtic Deep area of the Celtic Sea – the two long-endurance robotic vehicles will now work together over the next three weeks to investigate why this area is particularly attractive to marine predators such as dolphins and seabirds. The project will pave the way for a new era in marine research.

ASVs C-Enduro, an unmanned surface vehicle (USV) known as ‘Thomas’, is part powered by wind and solar energy and controlled remotely by satellite. Thomas will work in tandem with an underwater Slocum Glider moving up and down in the water.

Each vehicle will be carrying sensors capable of measuring the temperature and salinity of the water, and acoustic ‘pingers’ to detect plankton and fish shoals. The surface vehicle will also carries GoPro cameras to capture images of marine life and litter, and acoustic monitors to detect clicks and whistles from echo locating marine mammals.

The information will give scientists a better understanding of the environment, helping inform conservation and management of marine activities.

The C-Enduro will transit to an area South West of the Welsh coast known as the ‘Celtic Deep’, approximately 50 miles offshore. The glider was launched from Royal Research Ship Discovery and was ‘flown’ to meet Thomas at a point off the Welsh coast.

Next month the vehicles are scheduled to return to the National Oceanography Centre laden with pictures and data, which are expected to reveal the extraordinary richness of these waters.

The ‘Celtic Deep’ is a hotspot for marine mammals, including common dolphins, harbour porpoises and the world’s second biggest animal, the fin whale. Despite this it has yet to be designated as a Marine Conservation Zone (a type of marine protected area in the UK). The data gathered by Thomas could help inform the Welsh and UK Government processes for protecting this unique region.

The vessel is named Thomas after the father of Roland J Rogers of the National Oceanography Centre, the latest of five generations of seafarers.

Dr Lyndsey Dodds, Head of Marine Policy at WWF-UK, said: “As well as being home to a wonderful array of animals and plants, our seas provide vital resources such as food and energy. But our oceans are under increasing pressure and are in need of greater protection. By using innovative technology like these vehicles we can learn more about the life that is offshore and out of our sight and make sure these areas are given the protection that they need.”

NOC’s Prof Russell Wynn, who is co-ordinating the research for WWF, said: “Marine robotic technologies give us the opportunity to have a persistent presence in the ocean, and are changing the way in which we conduct science in the marine environment. The two vehicles on this mission are bristling with novel sensors that will act as our eyes and ears in the water, observing and detecting seabirds and marine mammals. The vehicles will also be continuously collecting data about weather conditions at the sea surface, the temperature and salinity of the water column, and the distribution and abundance of plankton and fish prey.”

Lack of data about the marine environment can present problems to policy-makers involved in marine conservation and management, such as designation of Marine Protected Areas. Autonomous vehicles or ‘robots’ have a huge potential as a solution to this problem, as they present a relatively low-cost alternative to large research ships as a means of gathering data. In the long term, developing countries in particular could scale up the use of these vessels to carry out marine monitoring in some of the least-studied areas of the ocean, enabling them to develop more effective conservation and management plans.