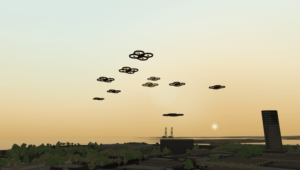 VT MÄK, a developer of simulation and training tools using realistic 3D simulated environments, has announced that it has created a virtual swarm of unmanned aerial vehicles (UAVs) using the company’s VR-Forces scenario generation engine. The UAV swarm was modelled inside a simulated Hawaii environment, to illustrate how virtual environments can be used to study concepts of operation and tactics development for unmanned vehicles.

The VR-Forces software modelled each UAV with a chaotic flight plan to mimic a human operator flying by radio control. The swarm flew over a simulated area populated by character models created with DI-Guy, VT MÄK’s human simulation tool. In addition to vehicles and terrain, VR-Forces can also simulate weapons and communications systems, with extra tools available for daylight, electro-optical, night vision, and infrared sensor feeds, as well as Synthetic Aperture Radar (SAR) images that see through atmosphere
and vegetation.

This exercise highlighted how scripting and artificial intelligence can work together within a virtual environment to create scenarios for analysis, test & evaluation, or demonstration. 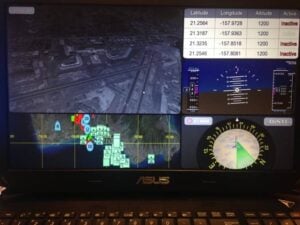 In addition to the UAV swarm, MÄK also built a simulation to demonstrate the use of a ground control station (GCS) within a virtual environment. This demonstration was composed of three parts: a UAV simulation constructed with VR-Forces, a sensor simulation built with MÄK’s VR-Vantage image generation software, and a very simple GCS application, built using a GUI development framework from MÄK’s partner DiSTI.

The UAV simulation modelled the unmanned vehicle’s autonomous navigation and accepted control messages up-linked from the ground station to control the flight and sensor pointing angles. The sensor simulation used the vehicle’s position and sensor pointing angles to render a full motion video of the virtual environment, modelling daylight, night vision, and infrared sensors. The life-like video stream was down-linked back to the GCS along with telemetry metadata.

This system could be tailored to feed simulated video to real ground control stations or used as a testbed for experiments with UAV operations.

A video of VT MÄK’s simulated UAV swarm can be seen below.