horizon-unmanned-systems News By Caroline Rees / 12 May 2015 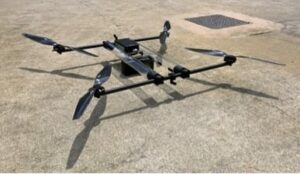 Horizon Unmanned Systems (HUS), a company that specializes in merging advanced energy systems with UAV platforms, has unveiled HYCOPTER, which the company claims is the world’s first hydrogen fuel cell powered multi-rotor UAV. HYCOPTER is being readied for a record flight endurance of 4 hours, or around 8 to 10 times the average flight duration of equivalent systems today.

Unlike other rotorcraft, HYCOPTER makes use of its frame structure to store energy in the form of hydrogen instead of air, eliminating energy storage weight. With less lift power required, HYCOPTER’s ultra-light fuel cell turns the hydrogen in its frame into electricity to power its rotors.

“By removing the design silos that typically separate the energy storage component from UAV frame development – we opened up a whole new category in the drone market, in-between battery and combustion engine systems,” said CEO Taras Wankewycz. “HYCOPTER is the first result of our efforts and we intend to demonstrate many more platform innovations in the coming months.”