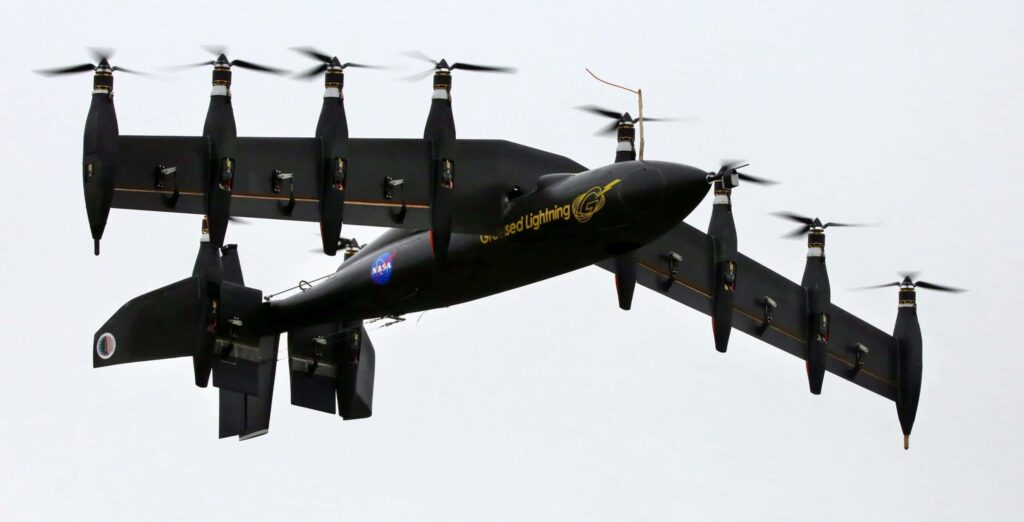 NASA researchers have confirmed that the Greased Lightning (or GL-10) battery-powered concept UAV has completed a series of successful flight tests.

Currently in the design and testing phase, Greased Lightning has 10 engines, can take-off like a helicopter and fly efficiently like an aircraft. The remotely piloted plane has a 10-foot wingspan (3.05 meters), eight electric motors on the wings, two electric motors on the tail, and weighs a maximum of 62 pounds (28.1 kilograms) at take-off.

Having already passed hover tests, flying like a helicopter, the team have now completed tests assessing the transition from vertical to forward “wing-borne” flight.

“During the flight tests we successfully transitioned from hover to wing-borne flight like a conventional airplane then back to hover again. So far we have done this on five flights,” said Fredericks. “We were ecstatic. Now we’re working on our second goal — to demonstrate that this concept is four times more aerodynamically efficient in cruise than a helicopter.”

One other advantage to the GL-10 besides its versatile vertical take-off and landing ability is its noise or lack of it. “It’s pretty quiet,” said Fredericks. “The current prototype is quieter than a neighbour mowing the lawn with a gas-powered motor.”

The next step in the GL-10 test program is to try to confirm its aerodynamic efficiency.

Bill Fredericks, an aerospace engineer at NASA’s Langley Research Center in Virginia, said “The GL-10 could be used for small package delivery or vertical take-off and landing, long endurance surveillance for agriculture, mapping and other applications. A scaled up version — much larger than what we are testing now — would make also a great one to four person size personal air vehicle.”