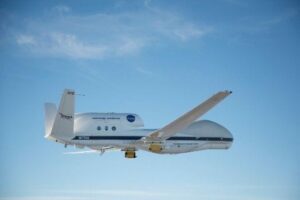 Scientists at the University of Hertfordshire have designed and built a new type of instrument for climate research that is capable of detecting and analysing microscopic airborne particles at altitudes twice as high as a commercial jet flies.

The instrument, called an Aerosol Ice Interface Transition Spectrometer (AIITS), has been built specifically to fly on NASA’s unique Global Hawk unmanned aircraft, based in California and capable of flying continuously for twenty hours or more at altitudes up to 65,000ft.

Developed by the University’s Centre for Atmospheric and Instrumentation Research (CAIR) in collaboration with colleagues at the University of Manchester, AIITS will give atmospheric scientists previously unobtainable details of the size, shape and structure of microscopic cloud particles that are present in the highest levels of our atmosphere.

It works by allowing the minute airborne ice crystals, dust particles, water droplets and even some biological particles to pass through a laser beam as the aircraft flies through them at hundreds of miles per hour. Each particle scatters the light in a complex pattern that is captured by a system of lenses and ultra-sensitive cameras. Each pattern can be used to classify or even identify the particles – just like a thumbprint.

Dr Chris Stopford, one of the AIITS designers said: “AIITS is one of the first UK-built instruments to fly on NASA’s Global Hawk, and we’re gathering data from particles no-one has been able to acquire before – it’s tremendously exciting from both scientific and personal perspectives”.

Professor Paul Kaye, Hertfordshire’s lead on the AIITS project, said: “This is about as close to ground-breaking science that we can get in the atmospheric physics field and it is also the first time that UK-built instruments have been flown on this amazing aircraft.”