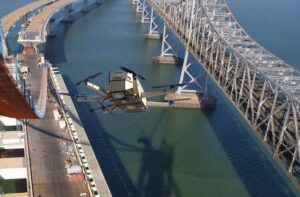 The vehicle has 6 – 26” carbon fiber propellers, an estimated flying time of 2+ hours minimum at a maximum velocity of 40 mph, with a maximum payload of 20 lbs and a maximum range of 100 miles. It can operate in wind/gust conditions up to 35 mph.

The UAV is equipped with TopFlight’s Advance Autopilot System that tunes and calibrates the propulsion system fuel system which includes a 5000W rated (6000W peak) hybrid engine, 3 gallon tank and 16,000 mAh LiPo battery. The UAV can operate in manual, semi-autonomous or fully autonomous mode and includes an onboard flight data recorder, with a RC remote with 2-mile max range, and a Top Flight 8 mega-pixel gimbaled camera with high-definition downlink.

The aircraft’s range is many times that of many quadcopters, most of which run on batteries, and can fly for an average of around 40 minutes between charges with a payload weighing just a couple of kilograms. The new drone can also fly more than twice as far as a radio-controlled, gasoline-powered helicopter of similar size.

The efficiency of Top Flight’s drone is made possible by using batteries to supplement the gasoline engine. Power can come from the batteries, from a gasoline generator, or from both at once. Because the gasoline engine doesn’t have to supply all of the power, it is possible to use a much smaller and more efficient engine. Unlike a hybrid car, however, Top Flight’s drone does not capture energy from braking.

Top Flight is not the first company to try hybrid technology with drones. The U.S. Army and Air Force, together with an Oregon-based company called Northwest UAV, have experimented with hybrid airplanes. A representative of Northwest UAV says the company is also working on a hybrid system for use with multi-rotor craft such as quadcopters.

Long Phan, cofounder and CEO of Top Flight, says “Future vehicles will fly well over three hours — we already have the new engine to do it.” The company is also developing object-avoidance technology and other safety features for UAVs.