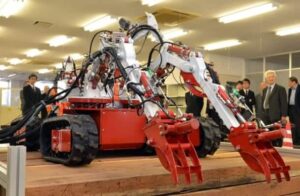 Waseda University’s Future Robotics Organization and the Kikuchi Corporation have announced that they have developed a remote-controlled four-armed, four-wheeled crawler robot designed to clear rubble and save lives in areas with complex terrain. The robot was unveiled at the Kikuchi plant in Minami-Soma Fukushima, previously a designated no-go zone from the nuclear disaster crisis.

The robot’s name, “Octopus,” derives from the fact that it has eight limbs. Octopus is 1.7 meters in height and weighs 70 kilograms. The robot can be equipped with a fiber laser capable of cutting through stone and a grappler capable of dealing with radioactive waste. It is expected to have a wide range of applications including assistance in lifesaving efforts for people trapped in buildings destroyed by earthquakes, tsunamis, and fires and radioactive waste management.

Robots of this variety have generally been focused on performing one function at a time on flat terrain. However, the Octopus robot’s ability to utilize its four wheels and crawlers to traverse complex terrain and rubble and its ability to utilize all four of its arms simultaneously thanks to its hydraulic capabilities allows it to perform a wide range of tasks such as clearing rubble, fallen trees, and extinguishing fires. When traversing uneven terrain, the robot uses its two rear arms to support its body while climbing with its two front arms and crawlers. Each arm is capable of lifting objects of up to 200 kilograms and all four arms can be used to lift the robot’s body from the ground. This type of robot that can utilize four arms simultaneously is very rare. Presently the robot is operated by two people from a remote location but is expected to be operated by one in the future.

During the robot’s unveiling, Professor Masakatsu Fujie commented, “We are planning to establish a research facility in Kikuchi Minami-Soma plant. We hope to overcome the obstacles that come with natural disasters and an aging society, and use this robot to bring new industries to Fukushima prefecture.

Fukushima governor, Masao Uchibori, commented, “The revitalization of Fukushima’s industries is essential and we are becoming a hub for innovation in robotics. Robotics are extremely important for Japanese industries and we must challenge ourselves to produce wonderful products and continue developing Minami-Soma.” Katsunobu Sakurai, mayor of Minami-Soma, followed the governor and commented, “Before the disaster, Minami-Soma was a hub for robotics. Many employees left and spread themselves across Japan but an enthusiasm to rebuild Minami-Soma has reinvigorated our robotics initiatives. Kikuchi Corporation’s enthusiasm has persisted despite the government’s no-go zone designation and for that I would like to express my gratitude.” The mayor continued by expressing his hopes for the robotics industry and his desire to revitalize Minami-Soma.