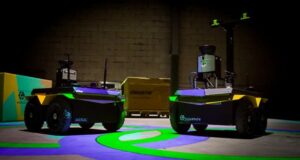 Clearpath Robotics, a company specializing in unmanned vehicle robotics, has combined resources with Christie, a visual technologies company, to create a three-dimensional video game using robots. The pairing of Clearpath and Christie bridges two technologies, from unrelated fields, to create an interactive experience in a way that has never been done before.

The project was produced during Clearpath’s “hack week,” where team members experiment and innovate with new technology and ideas. Computer graphics were displayed on the floor using Christie’s 3D projection mapping equipment to create a digital arena, while robots dueled with laser beams. Clearpath was inspired by a project from MIT; however, they wanted to create a version using open source software and run as a completely interactive program.

“Teaming up with Christie allowed us to experiment with the latest 3D projection mapping technology in combination with our Jackal robots and open source software. This was our recipe for an augmented reality video game,” said Ryan Gariepy, Co-Founder & Chief Technology Officer at Clearpath Robotics. “Combining both of our technologies resulted in a one-of-a-kind experience that was fun to work on and even more fun to play with.”

Augmented reality is a term used to describe the superimposing of a computer image in the real world.
Utilizing Christie’s overhead 3D projectors, the Clearpath team created an overlay under their Jackal unmanned ground vehicles to display weapons, recharging shields, hitpoints, and sound effects for a two player (or human vs. A.I.) game.

For this project, Christie provided four Christie HD14K-M 14,000 lumens 3DLP® projectors and two cameras. The projectors use Christie AutoCal™ software and have embedded Christie Twist™ software. Christie rigged the four projectors in a 2 x 2 configuration on the ceiling of Clearpath’s warehouse. The cameras captured what was happening on the floor and sent that information on the Christie AutoCal™ software, which then automatically aligned and blended the four projectors into one, giant, seamless 30-foot projection-mapped digital canvas. The Christie hardware and software, in conjunction with two of Clearpath’s Jackal robots and computer system allowed for the augmented reality experience to take place.