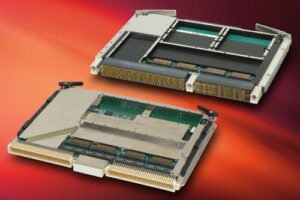 Aitech Defense Systems Inc., a provider of embedded and computing technologies for mission-critical applications, has announced that it has enhanced the C111 and C112, two of its Freescale T4-based single-slot 6U SBCs, to include the new, low power, multi-core, multi-processor T4080 QorIQ with AltiVec technology.

With their exceptional resistance to thermal shock and mechanical shock and vibration, the 6U VME C111 and 6U VPX C112 SBCs are ideal for use in high-end commercial, rugged industrial and defense applications where board performance and costs can be uniquely tailored to the application.

The new SBCs are equipped with two PMC/XMC sites to support PCI/PCIe for high-speed functions and to expand board functionality. Available in either conduction- and air-cooled versions, the boards can be used in a diverse set of applications, limited only by the imagination of the software developers.

The C112 supports VPX (VITA 46.0) and OpenVPX (VITA 65) platforms and offers the same I/O as the C111, only more, including up to six Gigabit Ethernet ports, an additional SATA 2.0 port and multiple backplane switch fabric options.

The C111 and C112 each provide 4 GB of high speed DDR3 SDRAM divided into two separate memory channels for efficient processor-to-memory or memory-to-memory message passing and data transfers. Additional memory resources include 256 MB of NOR flash memory, up to 16 GB of Flash disk mass storage and 512 kB of NVRAM (MRAM).