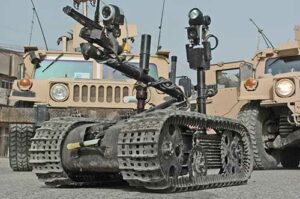 QinetiQ North America has announced that it has been awarded a United States Army contract to build, refurbish and modernize QNA’s TALON IV military robots used extensively in combat in Afghanistan and Iraq.

Through the U.S. Army’s Contracting Command in Warren, Michigan, QNA was awarded in September the contract worth over $17.5 million for spare parts and upgrades to its fleet of TALON robots. The spares will sustain fielded systems in operation today while the upgrade and modernization of the battle tested TALON robot will continue to provide life-saving support to U.S. warfighters in both current operations and future deployments.

QNA has also been awarded an IDIQ (Indefinite Duration, Indefinite Quantity) contract through the Naval Surface Warfare Center under the Man Transportable Robotic System (MTRS) program. This 3-year IDIQ contract, which could be worth up to $30 million, from Naval EOD Technology Division for TALON MTRS Mk2, provides for purchase of new systems, reconditioning, upgrades and spare parts for the MTRS Mk2 fleet of TALON robots.

“QinetiQ North America is very proud of the role our robots play in providing lifesaving standoff for our warfighters when in harm’s way. We are also grateful for the confidence shown by the U.S. Military in the robust and reliable capabilities provided through our family of robots,” said Derek Daly, Vice President of Land Systems at QNA.