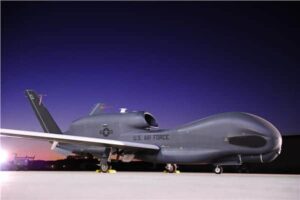 “There are at least two Global Hawks in the air at all times providing indispensable ISR information to those that need it,” said Mick Jaggers, Global Hawk UAS program director, Northrop Grumman Aerospace Systems. “The 2014 fiscal year was the most active yet for the Global Hawk, with a 40 percent year over year increase in flight hours.”

The increases in flight hours and size of the fleet will give combatant commanders more ISR capabilities at a time when demand often outstrips aircraft availability.

Manufactured at Northrop Grumman facilities in Moss Point, Mississippi, and Palmdale, these latest RQ-4 Global Hawk models complete a four aircraft buy by the Air Force and brings the Air Force’s total Global Hawk fleet to 33. In August, the Air Force signed an agreement requesting three more Global Hawks. Those aircraft are scheduled for delivery in 2016 and 2017.