Drone America and AMR Collaborate on UAVs for Emergency Rescue 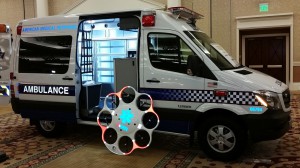 Drone America, an aerospace company, and American Medical Response (AMR), a medical transportation company, have announced a partneship that aims to bring Unmanned Autonomous Systems (UAS) to the EMS industry. By leveraging UAS technologies, AMR’s specialty teams would be able to provide swifter and safer rescue operations in dangerous situations such as disaster response, mountain rescue and swift water rescues.

“We are looking at the various potentials for the use of UAS’s for both the delivery of medical services such as an AED, and as a platform for public safety such as search and rescue operations and communications platforms,” said AMR’s Senior Vice President of Operations Randall Strozyk.

“Drone America’s DAx8 is specifically engineered with emergency services and first responders in mind,” said President and CEO of Drone America Mike Richards. “We place great emphasis on listening to first responders, which influences our designs and gives us the ability to manufacture mission specific unmanned systems. Once completed, our systems will be a tool that could make a difference in their everyday lives, including increase safety, reduce response times and providing support during emergency situations and disasters.”

Both AMR and Drone America hope that this collaboration will cultivate a potential use of unmanned systems for life-saving applications.