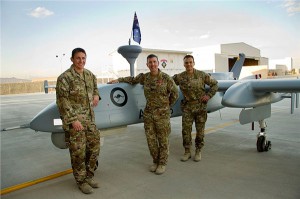 “The Australian Heron capability forged a fine reputation among our American and other Coalition partners here in ISAF as a result of our can-do attitude and the capabilities of this aircraft.

From Heron’s first days supporting the Special Operations Task Group through to the end of Australia’s mission in Uruzgan province last year and support to ISAF units throughout 2014, Heron has provided commanders on the ground with information they needed to fight and keep their people safe.”

Wing Commander Phillip Parsons said the Heron personnel had excelled in their role in Afghanistan.

Chief of Joint Operations, Vice Admiral (VADM) David Johnston, said the Heron teams had made a significant contribution to Australia’s mission in Afghanistan.

“This final flight marks the end of a dedicated and well-executed mission that has been pivotal in keeping our personnel safe, minimising the risk to civilians on the ground and achieving our Operation SLIPPER mission,” VADM Johnston said.

“Defence personnel from all services who have deployed with Heron can hold their heads high for further developing the capability of the ADF to employ the RPA, while forging and maintaining a strong reputation for professionalism among the ADF as well as with our international partners.”

Three Heron Remotely Piloted Aircraft were based at Kandahar Air Field and operated in southern Afghanistan.

Approximately 490 Air Force, Navy and Army personnel deployed with the Heron detachment during its 15 rotations.

Following the conclusion of Australia’s mission in Uruzgan in December 2013, the Heron mission was extended to support ISAF members in Regional Command – South, including support to the 2014 Afghan presidential election.

All Heron detachment personnel will return to Australia by the end of December 2014.