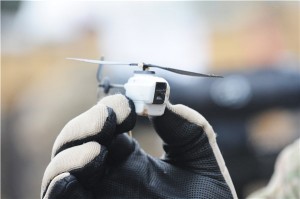 The Cargo Pocket Intelligence, Surveillance and Reconnaissance program, or CP-ISR, seeks to develop a mobile soldier sensor to increase the situational awareness of dismounted soldiers by providing real-time video surveillance of threat areas within an immediate operational environment.

While larger systems have been used to provide over-the-hill ISR capabilities on the battlefield for almost a decade, none deliver it directly to the squad level, where soldiers need the ability to see around the corner or into the next room during combat missions.

When soldiers and small units need to assess the threat in a village, or in thick canopy terrain where traditional ISR assets cannot penetrate, the CP-ISR can be deployed to provide that capability.

Prox Dynamics’ PD-100 Black Hornet, a palm-sized miniature helicopter weighing only 16 grams, has the ability to fly up to 20 minutes while providing real-time video via a digital data link from one of the three embedded cameras and operates remotely with GPS navigation. Tiny, electric propellers and motors make the device virtually undetectable to subjects under surveillance.

The size, weight and image-gathering capabilities of the system are promising advancements that fulfill the burgeoning requirement for an organic, squad-level ISR capability, but more work still needs to be done.

Several efforts are underway to develop three different aspects of the technology to ensure it is ready for the soldier and small unit.

The first of these efforts is focused on a redesign of the digital data link to achieve compatibility with U.S. Army standards.

The second focuses on developing and integrating advanced payloads for low-light imaging, allowing for indoor and night operations.

Lastly, researchers are continuing to develop and enhance guidance, navigation and control, or GNC, algorithms for the CP-ISR surrogate system. This will allow the airborne sensor to operate in confined and indoor spaces, such as when soldiers advance from room to room as they are clearing buildings.

NSRDEC will collaborate with the Maneuver Center of Excellence, the Army Research Laboratory and other organizations to support the Army Capabilities Integration Center’s Manned Unmanned Teaming (Ground) Limited Objective Experiment, by demonstrating the current capabilities of mobile Soldier sensors.

While the final system could be different from the surrogate system, NSRDEC officials said they are focused on proving the basic capability first.