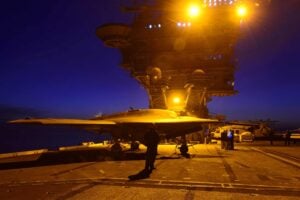 The Navy’s X-47B completed its final test aboard USS Theodore Roosevelt (CVN 71) Aug. 24 and returned to its home base at Naval Air Station Patuxent River after eight days at sea.

While underway, the X-47B flew in the carrier pattern with manned aircraft for the first time and conducted a total of five catapult launches, four arrestments and nine touch-and-go landings, including a night time shipboard flight deck handling evaluation.

“This is another detachment for the record books; all tests were safely and effectively executed,” said Capt. Beau Duarte, Navy’s Unmanned Carrier Aviation program manager. “We have set the bar for the future of unmanned carrier aviation.”

Testing began Aug. 17 when the X-47B performed its initial cooperative launch and recovery cycle with an F/A-18. With its automatic wing-fold capability and new tailhook retract system, the X-47B met the program’s objective to demonstrate that carrier-based manned and unmanned aircraft could maintain a 90 second aircraft launch and recovery interval.

Throughout the week, the Navy/Northrop Grumman test team captured X-47B flying quality and recovery wind condition data to evaluate how the aircraft responds to wake turbulence during approach and landing. This data will be used to improve a simulation model for use with carrier-based aircraft.

The team also evaluated how the unmanned aircraft performed during the first night time taxi and deck handling operations aboard a carrier. Since the shipboard environment presents different challenges at night, this test was an incremental step in developing the operational concept for more routine unmanned air system flight activity.

The Navy will continue to execute shore-based testing at Patuxent River to further the goal of seamless integration with manned aircraft and to refine best practices for the evaluation of future unmanned air systems.