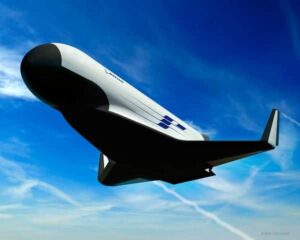 An artist’s concept of the “XS-1” Experimental Spaceplane

Under the $4 million preliminary design contract, Boeing plans to work on a reusable first stage launch vehicle capable of carrying and deploying an upper stage to launch small satellite payloads of 3,000 to 5,000 pounds (1,361 kg to 2,268 kg) into low-Earth orbit.

“Our design would allow the autonomous booster to carry the second stage and payload to high altitude and deploy them into space. The booster would then return to Earth, where it could be quickly prepared for the next flight by applying operation and maintenance principles similar to modern aircraft.” said Will Hampton, Boeing XS-1 program manager. “Drawing on our other innovative technologies, Boeing intends to provide a concept that uses efficient, streamlined ground infrastructure and improves the turnaround time to relaunch this spacecraft for subsequent missions.”

DARPA plans to hold a Phase II competition next year for the follow-on production order to build the vehicle and conduct demonstration flights.