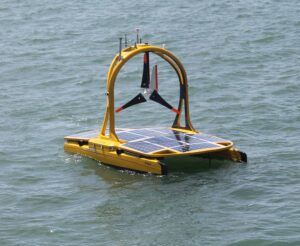 Heriot-Watt University’s Edinburgh Campus, have confirmed the order of an ASV C-Enduro.

The C-Enduro Unmanned Surface Vehicle (USV) will be used for research in persistent and long term autonomy with multiple remote and autonomous marine platforms.

The vehicle’s primary application will be as a moving navigation and communication platform for AUV’s.

Professor David Lane of Heriot-Watt said: “The vehicle will be available to students in the EPSRC Centre for Doctoral Training in Robotics and Autonomous Systems as a research facility.

“The facility will train upward of 65 Innovation Ready PhD students in aspects of robot interaction, starting in the autumn of 2014” he continued.

The research involving C-Enduro forms part of the ROBOTARIUM national UK facility for research into the interactions amongst robots, environments, people and autonomous systems. This initiative is run by EDU-RAS (The Edinburgh Alliance in Robots and Autonomous Systems) and involves both Heriot-Watt University and the University of Edinburgh.

The ASV C-Enduro was selected during a competitive tendering process which was first advertised in November 2013.

Differing to previous variations of C-Enduro built by ASV, this lighter model will be battery powered only.

The standard C-Enduro centres on a three-pillar power structure of solar power, a wind turbine and a diesel generator to maximise its sea endurance.