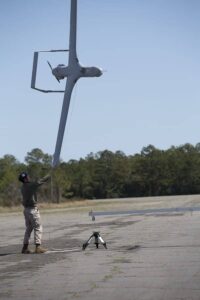 The Department of the Navy’s new, versatile small unmanned aircraft system made its first operational deployment overseas at the end of April with a Marine UAS squadron.

“Blackjack will bring new capabilities to the warfighter and provide them greater target acquisition capability with multiple plug-and-play sensors allowing them to stay ahead of the threat,” said Col. Jim Rector, Navy and Marine Corps Small Tactical Unmanned Aircraft Systems program manager who oversees the RQ-21A program. “It is a tremendous accomplishment for the Marines, government and industry team to see it deploy for its first operational mission.”

RQ-21A has a significantly larger payload, mass, volume and power than other small UAS used by Marines in theater today, he said.

The expeditionary nature of the RQ-21A, which does not require a runway for launch and recovery, makes it possible to deploy a multi-intelligence-capable UAS with minimal footprint from ships. This is critical for amphibious operations that Marine Expeditionary Units conduct in in access-denied environments, Rector said.