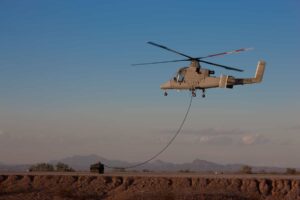 In collaboration with the U.S. Army Tank Automotive Research, Development and Engineering Center, Lockheed Martin will conduct a notional scenario later this year, in which a K-MAX autonomous rotorcraft will transport a Gyrocam-equipped SMSS via sling load into a simulated “area of interest” deemed too risky for human presence. The K-MAX will position itself over the intended release point and autonomously set down, releasing the SMSS upon command from a remote operator.

Once delivered, the sensor-laden and satellite communications-equipped SMSS will assess the area using a combination of autonomous capabilities and tele-operation that will be managed from a remote site, while the K-MAX will return to base.

“This level of mission cooperation between unmanned air and ground vehicles of this size, controlled beyond line-of-sight, is an industry first,” said Joe Zinecker, director of combat maneuver systems at Lockheed Martin Missiles and Fire Control. “This demonstration could lead to expanded missions, such as remote sensing and monitoring of suspected chemical, biological, radiological, nuclear and explosive threats or events.”

The demonstration is a follow-up to a 2012 exercise at Camp Grayling, Mich., in which a Gyrocam-equipped SMSS, operated via satellite from more than 200 miles away, successfully conducted a simulated reconnaissance mission.

In this new scenario, the Gyrocam reconnaissance, surveillance and target acquisition sensor onboard the SMSS will be used to locate, observe and obtain coordinates of targets and other objects of interest. The coordinates and sensor imagery will be passed back through a satellite communications system to a remote operations center hundreds of miles away for analysis.