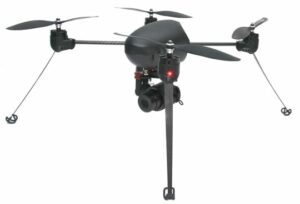 Draganfly Innovations has launched two new multirotor helicopters, the Shadow and the Guardian. These quadrotor aircraft are built to carry high megapixel cameras and transmit the live video feed back to the operator. Both aircraft share the same frame, with the Guardian sporting more powerful motors and a larger battery, giving it a higher payload capacity.

The Shadow and Guardian quadrotor helicopters are designed, manufactured, and hand assembled in North America by Draganfly Innovations. Their size is 71cm (28 inches) in diameter and 25cm (10 inches) in height. The versatility of both models makes them suited for use by safety and rescue, researchers, inspectors, experimenters, educators, photographers, or anyone needing an airborne video and photo system.

Features of the airframe shared by the Shadow and Guardian include the wide stance landing gear which prevents tip over during takeoff and landing, rugged carbon fiber construction, automated GPS position hold, altitude hold, and automated fail-safes for Auto-Land and Return-to-Home. The controller features a direct sunlight viewable touch screen, live aircraft telemetry, audible system warnings, and a wireless “buddy system” for connecting an optional additional controller during flight training or when having a second person act as camera operator. Visually, both the Shadow and Guardian look similar, but the Guardian’s more powerful motors and larger battery give it a 400g payload capacity vs the 300g payload capacity of the Shadow.

The Shadow and Guardian helicopters are highly capable for applications such as aerial photography, industrial inspection, 3D terrain mapping, wildlife protection, agriculture, research, search and rescue, and public safety. Each system includes a free Lil’ Draganflyer miniature quadrotor helicopter for flight training to prepare the user for the feel of a quadrotor helicopter.

The Guardian system comes with a military grade transport case, which holds the aircraft and all of the accessories needed for the operator to be ready to go at any time. The only steps needed before takeoff are to snap the landing struts in place, attach the 1/4 turn quick release payload, and install the battery. It only takes a matter of minutes to unpack and start flying.